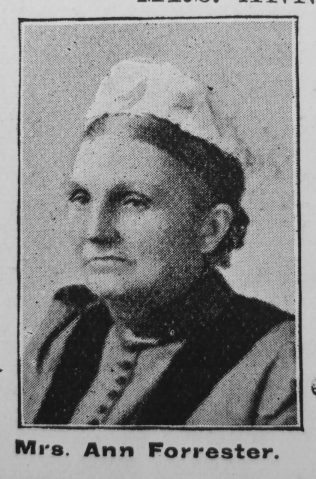 Transcription of Obituary in the Primitive Methodist Magazine by W. Evans

The Church at Wem has suffered a distinct loss in the death of Mrs. Ann Forrester, relict of Mr. William Forrester, farmer of Tilley. The family have been connected with our Church at Wem for more than a generation. The father, James Brown, was one of the original trustees, and all his children were converted and joined the Primitive Methodist Church. Our sister was converted at the early age of eleven and died in her seventy-first year, so she had been a true and loyal member of our Church 60 years. Christ was to her a living reality. She was quite at home in talking of experimental religion, was able to give an intelligent reason for the hope within her. She loved the prayer meeting and the class meeting, was most regular in attendance on Divine worship, and when the state of her health did not permit her to go she felt the deprivation much. In one of her letters to her sister, she says, “I’m tired of not going to chapel. I’m glad you do not forget me at the mercy seat. The Word is all my comfort, it cheers me when nothing else will. I have been too bad to read but I can read now till the tears run down, it is so sweet.” When her sister was staying with her, on returning home from chapel on the Sunday evening, and telling her that they had had a good meeting, she replied, “Praise the Lord, so have I. I have sung and prayed and read a chapter.” This instance reveals a soul in close communion with God. She had great trials but she realised the all-sufficiency of Divine grace. When the writer first knew her, 34 years ago a great sorrow entered her household, she had buried one child previously and now a boy of fourteen, a girl of nine, and a baby at the breast were taken away in three weeks and she was left childless. This was a heavy blow and she was years before she was able to look up, and we believe it was thought she might be grieving God by her excessive sorrow that brought her to herself again. She was a liberal supporter of our church at Wem when its members were fewer and its position weaker than it is to day. She was given to hospitality – her home was always open for the servants of God.

The Rev. Joseph Shenton writes:- “I knew Mrs. Forrester, of Tilley, more than twenty years ago, and formed a high estimate of her Christian character. She was a devout woman, given to prayer and to the study of the Word. The last time I had the opportunity of conversing with her was a few months after the death of her husband. I found her trusting in the alone merits of Christ and looking to the Lord for grace from day to day according to her need.”

The Rev. J. Ferguson writes:- “Twenty-nine years ago it was my joy to meet in fellowship with Mrs. Forrester in the Wem Church. Her home at Tilley was a place of change, quietness and rest. She was a woman of deep convictions and religious emotions. Her experience was seldom, if ever, darkened by doubt. Her assurance was an inspiration to others. When fullhanded as a farmer’s wife, to miss her from the week-day service and church class was to the minister and members a cause for inquiry. Oh for more such godly women!” She passed away June 7, 1902. Almost her last words to her brother were “I have no fear; meet me in Heaven.”