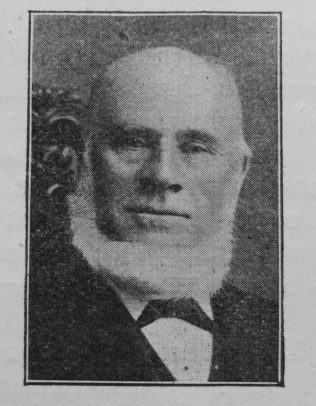 Transcription of Obituary in the Primitive Methodist Magazine by T.R.

The subject of this short sketch was born at the village of Weston, near the town of Crewe, on June the 10th, 1839; he lived in his native village for twenty years. He then removed to Haslington Where he resided for fifteen years. He then removed to Crewe, where he had been appointed manager of Mr. Richard Pedley’s cheese warehouse. This position he held till the time of his death.

Brother Furber was one of the oldest Primitive Methodists of the district, having been a member of the Haslington and Crewe societies for about fifty years.

During the whole of these years he took the most active interest in all that concerned our church. He filled the office of a lay preacher for forty-five years with great credit to himself and the Connexion. He undertook the responsible position of trustee for several of our chapels, and filled the office of assistant circuit steward during the last twelve years of his life.

In all these forms of service he gave great satisfaction to his brethren. There are few men who have done more to advance the cause of our Church in this part of Cheshire than he, and he will long live in the affectionate memory of the churches and circuits he served.

He was always regarded as a man of the highest integrity by those who knew him, as he was most straightforward and honourable in all his dealings and possessed those noble qualities of manhood which caused him to be much respected by his fellowmen.

He was by nature of a social disposition and full of humour, he had a heart to feel for and to help those who were sick or in trouble, and much joy has he ministered to these down-cast souls. In his home there was always a welcome both to ministers and lay-men, for he truly loved his brethren. He was a staunch temperance man, and a decided Liberal in politics, a man of very pronounced views and action.

As a man physically he was well built and strong, and enjoyed good health during his life, till about a year and a-half before his death. He then had a bad attack of rheumatism which left him with a weak heart. From this time his health was not good, and in this weakened condition he was seized with a bad attack of influenza from which he never rallied, but passed away in peace in the sixty-sixth year of his age. He leaves behind a widow, two sons, and four daughters, all of whom are members of the church who hope to meet him again in the better land.

The funeral took place on April 29th. He was interred in the graveyard by the chapel at Haslington. The attendance was large, many of his townsmen were represented at his funeral, also deputations were sent from the district committee and district meeting, which was then holding its sittings at Whitchurch. On every hand there were signs of the greatest respect shown to the deceased and his family.

A short service was conducted in the Mill Street Church by the circuit ministers, and also in the church at Haslington, when suitable addresses were given by the Rev. J.T. Horne and H. Owen, late ministers of the circuit. The occasion was felt to be sacred and solemn.

The memorial service was conducted in the Mill Street Church on the following Sunday, by Alderman William McNeill, who had been one of his oldest friends for over thirty years, and a member of the same church during the whole of this period. Mr. McNeill’s address was a fit and suitable tribute to the memory of a faithful and honest-minded Christian man.

Thomas was baptised on 25 June 1839 at Wynbunbury, Cheshire. His parents were John, who worked the land, and Elizabeth.