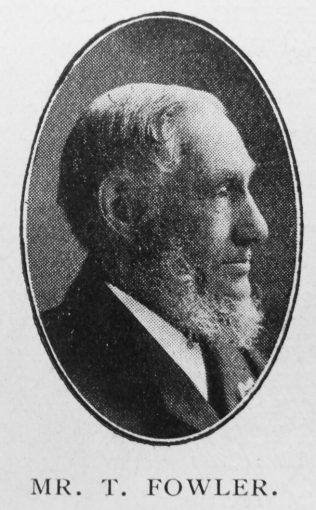 On June 6th Brother Tom Fowler was translated. Though the last weeks of his life were heavily clouded, he bore grand testimony to Jesus Christ. Forty years a member in the St. Day Circuit, for most of that period he was a zealous local preacher. In these labours he was greatly encouraged by his devoted wife.

Rev. A.E. Wilcox writes: “I remember him . . . . so generous, hospitable, and considerate; and who can forget his untiring labours for God, his quaint, illuminating and entrancing expositions?”

A faithful class leader, trust treasurer, trustee and treasurer of Skinner’s Bottom Chapel, and circuit steward, his place will be hard to fill.

Thomas was born abt1840 at Hollacombe, Devon, to parents Thomas, who worked the land, and Mary.

He married Harriet Ching (1843-1930) in the spring of 1862 at Hollacombe, Devon. Census returns identify ten children.

Thomas died on 6 June 1912 in the County Asylum, Bodmin, Cornwall.