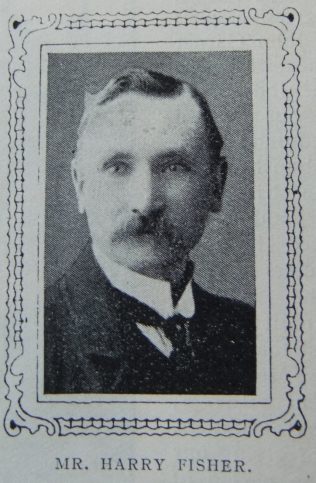 Mr. Wm. Henry Fisher, has been connected with Higher Ince Church, Hindley Circuit, from his childhood, his father, the late Henry Fisher, being among the first to mission the place. Brother Fisher joined the Church as a member in 1876 when 13 years of age. He was a Class leader 20 years, Organist 30 years, S.S. Superintendent 22 years, and Junior Circuit Steward 5 years. Although always religiously inclined, he was not satisfied until he knew himself  “a child of God,” and “an heir of heaven.” He gratefully confesses that “the lines have fallen to him in pleasant places,” and that he is greatly indebted to God for a Christian home and training.

As a man he is of a meek and quiet spirit, and of retiring disposition, and yet he holds strong convictions, deep-rooted in his own experience of the love of God in Christ Jesus. In conversation, his words are few and seasoned, whether for edification or reproof. He has several times been proposed as Delegate to District Meeting, but has never felt free to accept the distinction. He is always willing “in honour to prefer another.”

As a Class leader, he takes a personal and practical interest in the welfare of his members. He has both the mind and the means to help the needy, and that with true brotherly sympathy. Nor is his outlook simply parochial, he possesses the Connexional spirit and responds to the Connexional claims. No less by example, than by precept, does he “allure to brighter worlds and lead the way.” Courteous, intelligent, appreciative, sympathetic, he “adorns the doctrine of Christ our Saviour in all things.” He is happily married. Mrs. Fisher is a true Christian lady, sharing in all her husband’s good works.

William was born abt 1863 at Wigan, Lancashire, to parents Henry Fisher and Ellen Gaskell. Henry was a provisions dealer.

William married Mary Ann Farrimond (b abt 1871) in the summer of 1893 at Wigan, Lancashire.