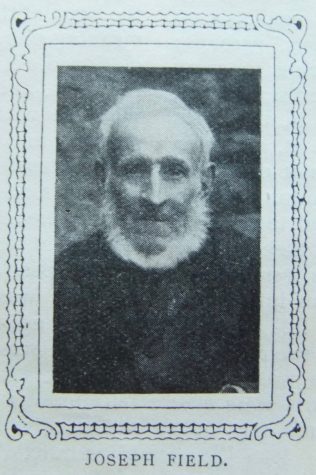 Mr. Joseph Field has held the position of Senior Class Leader at Brize Norton, in the Witney Circuit, for forty-five years. He can but seldom make the journey to the beloved chapel now, owing to age and infirmity of body, but he rejoices in the fact that his class still flourishes, and continues to provide workers for the Master’s vineyard.

Born October 14th, 1828, Bro. Field began life under conditions of severe poverty, and throughout life he and his good wife have known the meaning of hard work. But, despite adverse circumstances, our brother has been remarkably successful as a Christian worker.

He joined the Church sixty years ago, and was immediately placed on the plan by the saintly Henry Heys.

Joseph Field is a Primitive Methodist by conviction. He rejoices in all good news of his beloved Church. He is a missionary enthusiast, and the box kept by one or other of his children has produced a goodly sum at the Anniversary for half a century.

In his prime he was in great demand as Camp Meeting precentor and preacher, but his work has been done among the adults and children of his own village. For this pastoral work he is eminently qualified.

Of a bright and cheerful disposition, his is a charming and winsome sanctity.

During his career the society has flourished, until today it is the strongest village cause in the Circuit.

We pray for our dear old friend and his good wife a happy eventide. One thing we know: he will love to the end the Church he has served so nobly.

Joseph was born at Brize Norton, Oxfordshire, to parents Robert and Maria. Robert worked the land.

Census returns identify that Joseph spent his working life as an agricultural labourer.

Christian Messenger 1913/14 – Note: this sketch was published after Joseph had died.