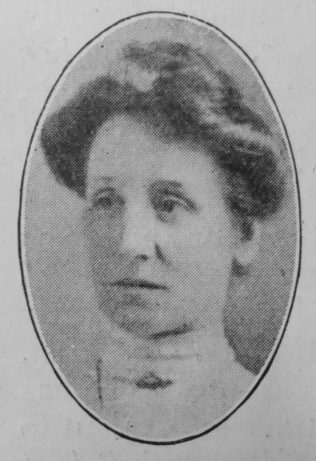 Through the death of Miss J. Faulkner our Brotton Society has suffered a great loss. She was the daughter of Mr. J. Faulkner who was for some time steward of the Saltburn Circuit. It was on her birthday, June 18th, 1892, that she was converted at the close of a service conducted by the writer of this sketch in Brotton Primitive Methodist Church, and since that date she has been a most ardent and devoted Christian worker, associating herself with every branch of the work of the church. For a considerable time she was president of the C.E. Society and organist of the church. Her fine genial spirit and kindly services especially to those in sorrow made her generally beloved. She was ever welcome in the homes of the people. It was my privilege to be a frequent guest in the hospitable home of her parents, and her home life was most beautiful and unselfish.

On her return from a visit to America late in 1907, the first symptoms of a fatal disease showed themselves. Despite the best medical skill she gradually sank, and died on April 2nd, 1908. During those last weeks she suffered uncomplainingly, her final hours being a fitting and triumphant close to a life of beautiful Christian faith. Her interment was marked with every sign of loving respect and tender sympathy for the bereaved ones. On August 2nd a fine tablet to her memory was unveiled by W. Bulmer, Esq., C.C., of Tantobie, in the church in which she had laboured so assiduously. She now rests “Until the day breaks and the shadows flee away.” She is beyond our sympathy, but her father and mother in the evening of their lives need our prayers, their wounds are deep and can only be ministered unto by the Divine hand.

Julia was born on 18 June 1868 at Marske by the Sea, Yorkshire, to parents Joseph, a grocer, and Jane.