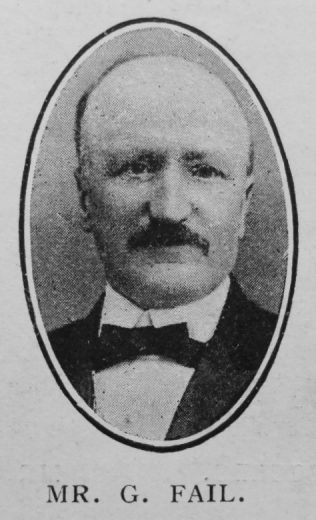 Bro. Geo. Fail, of Morpeth, in the Ashington Circuit, was born in Newcastle in 1845, and in early life removed to the neighbourhood of Choppington, where, after working in the mines from the age of thirteen, he commenced a successful business career thirty years ago.

Converted when twelve years old he joined our Guide Post society and remained a member and official for 41 years. On removing to Morpeth in 1899 he joined the Church there, and has been a mainstay of the society since. Truly we may say he died in harness.

Bro. Fail was a typical Northumbrian, sturdy in frame, alert in mind, devout in spirit. Possessed of Scottish caution, he was yet always ready to work for his Church with true enthusiasm, and showed a splendid loyalty to her interests. Prior to the interment in Morpeth churchyard on Feb. 10th a service was held in our church, in which Revs. J.H. Loveday, W. Pickering and Mr. W.H. Hughes took part. Rev. Geo. Fawcett represented the District Committee. Our sympathies are with the widow and two sons who mourn his loss.

He married Elizabeth Birtley (abt1846-1934) in the spring of 1867 in the Morpeth Registration District, Northumberland. Census returns identify four children.