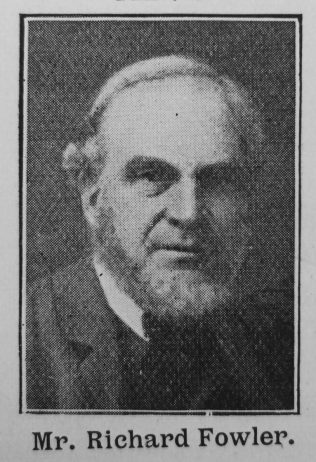 Transcription of Obituary In the Primitive Methodist Magazine by W. Evans

Mr. Richard Fowler – a local preacher in the Bromsgrove circuit – was born at Tonquor, in North Staffordshire, in May, 1831, and fell asleep in Jesus at the Forest Farm, Hanbury, December 5th, 1900, having been a member and local preacher thirty-four years. His father belonged to an old family of Staffordshire farmers, who had followed that calling for many generations, and were noted for their force of character and strong, practical common sense. His mother belonged to a yeoman family of the name of Wheeldon. She was a woman of piety and tenderness, leaving the most beautiful impressions of her character upon her son. The family were brought up to attend the services of the Church of England, and our dear brother had a strong predjudice against dissenting communities. In the year 1864 he became united in marriage to Miss Archer, of a Methodist family, who proved a helpmeet indeed in spiritual as well as in temporal things. Shortly after their marriage they entered into a mutual arrangement to attend church and chapel alternately. This continued until the year 1867, when a powerful religious awakening swept over the district, and Mr. Fowler became the subject of deep religious impressions. The Rev. John Tristram was then a minister in the Ramsor circuit, and one evening while visiting at Mr. Fowler’s house, he became aware of his host’s condition, and talked with him. Describing the way of faith, he illustrated it by quoting John iii. 14. Our friend grasped the truth, and realising its beauty and power in his own heart, he said : “I have it! I have it!” His conversion was real, as evinced by his at once joining the Church in the village chapel, as also by his loyalty to Christ and his earnest work and service during the remaining thirty-four years of his life. The Church soon recognised his ability, and set him to work, and by those of his own and other religious committees, his work was most highly appreciated. Journeys were not too long, nor was weather too boisterous, for him to keep his engagement. His earnestness, heartiness, sincerity and devotion won all hearts. He was in the truest and only apostolic succession “called by God and anointed by the Holy Ghost for the work.” Mr. Fowler was not of robust health, but we had hoped that he would continue his life of usefulness for some years. The last blow was sharp, but amid pain and restlessness of the body, there was strength and peacefulness of the soul. In the prospect of death and in death itself the light was there. The prospect of the higher life to which he was being called enraptured him. Referring to his mother and a son who had died many years ago he said: “I shall see my mother; I shall see little Rich.” And when he could scarcely speak he pointed in different directions as though amid a crowd of attending spirits he could recognise some he had loved on earth. Surely “the chamber where a good man meets his fate is privileged beyond the common walks of life quite on the verge of heaven.” Referring to those he loved and was leaving behind, he said he had prayed for his children and tried to set them a good example, and now left them in the Lord’s hands. It was not my privilege to know our dear brother but for a short time, but I had known him long enough to love him; to esteem him much for his high Christian character, his unswerving fidelity to the truth, and his loyalty to Christ and the Church of his choice. He was universally beloved in the circuit and out where he was known. His departure is a distinct loss to the circuit. May his bereaved widow and family be divinely sustained and ultimately all meet in the land where partings are unknown.

Richard was baptised on 29 April 1832 at St. Bartholomew, Longnor, Staffordshire. His parents were Thomas and Mary.