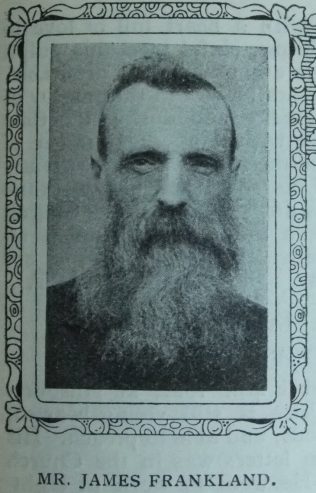 Our Bro. Frankland hails from Suffolk and is a native of Beccles. His earliest associations with Primitive Methodism were in the Wangford Circuit, of which Beccles formed a part. He commenced his career as a public speaker in 1869, receiving his first plan at the hands of the Rev. George Bell.

Thirty years ago he migrated to London, and for nearly the whole of that time he has been connected with the Grayshott Road Church, in the Lavender Hill Circuit.

Mr. Frankland is a class leader as well as local preacher. His main characteristics and qualifications fit him for both departments of Christian service. He has the gift of ready utterance, speaks plain Saxon speech, and is thus heard and understood by the people.

He is largely a man of one book – the Bible. It is his daily companion. His sermons and advice are full of apt scriptural quotations. Thus the members of class, or congregation, are built up. He is presumably a man of prayer. He knows the way to the throne. It is a well-beaten pathway. He is in his element in a prayer meeting. His spirit soars and “heaven comes down his soul to greet,” and gracious influences abound. He believes spiritual ends are best secured by spiritual means.

The ministers of “Grayshott” have found a faithful friend. The Church has in him a warm supporter. Mr. Frankland suffered a serious bereavement two years ago by the death of his wife. In this experience he has learned more abundantly the upholding power of the divine word.

We wish for him many years of service yet, and, at last, his Master’s recognition and reward.

James was born abt 1843 at Beccles, Suffolk. Both the 1851 and 1861 census returns show James living with his grandparents Deverson and Elizabeth Titshall. Deverson was a boot and shoe maker.

James died in the summer of 1913 at Battersea, London.