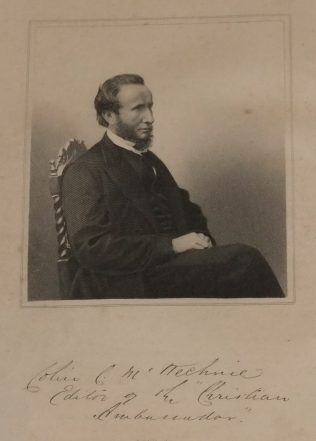 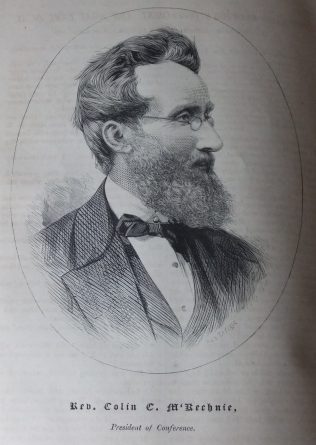 Colin was born on 13 December 1821 at Paisley, Scotland. He was brought into contact with Primitive Methodism as a boy through the influence of Bella McNair, a servant in his family. Conversion was followed by an insatiable thirst for knowledge. Watt’s ‘Improvement of the Mind’ was a key influence.  He became a class leader, then a local preacher, at the age of 15 and within two years of his conversion he was called into the ministry.

Patterson records this anecdote of Colin’s time in Hexham. On a pleasant Sunday morning, when he was walking from Edmondbyers to Carterway Heads, Mr. McKechnie was approached by two horsemen, one of whom was Hugh Bourne. It was a delightful surprise. Mr. Bourne was equally surprised when he learned that the young man—he was just over twenty—had been in the Primitive Methodist ministry about four years. “Well,” said Mr. Bourne, after expressing his wonder, “you will need much grace to keep you right, but not more than you can get. Be faithful, my young brother, be faithful; and the Lord bless you in your work, and keep you steadfast.”

Patterson writes; Mr. McKechnie’s superintendency of North Shields Circuit was a period never to be forgotten. The impression he made upon the political and literary circles of the town, as well as upon the churches, was considerable. For several years prior to his term conversions had been taking place in Shields and in the country places; indeed, an extensive work of grace occurred in 1858, when Thomas Southron was superintendent. It was at an ordinary service, on a Wednesday evening, in the autumn of 1867, that the first great manifestation of saving power was witnessed in the revival which spread through the circuit. Saville Street schoolroom was full, and when Mr. McKechnie had done preaching he thought that the words he had spoken had been forceless and inappropriate. Yet, scarcely had the prayer meeting commenced, than anxious seekers after God began to find their way to the penitent form. Among the seventeen penitents that night was his own daughter Kate. A colleague gives this description of one of “the usual Friday night prayer meetings” which Mr. McKechnie was planned to conduct:—

“To use the old term, there was an unction in the opening prayer that lifted us up to the ‘heavenly places.’ . . . There were alternations of singing and prayer, such as you only hear on occasions like this, blended with strong crying and tears, and shouts of salvation from I know not how many. . . That night every form was a penitent form. I had seen my friend in positions of honour, or on the platform where he swayed a host of people, as the wind sways the trees of the wood, or in the pulpit when in the mood he preached in power, or in debate, or in company, where I admired him, but never as on that night when I saw him stepping over form after form amongst the people struggling in the pangs of the second birth, pleading with them, striving to lead them into the way of peace, the falling tear bespeaking the intense sympathy of his heart, and anon the radiant expression of joy which lit up his countenance, and the exclamation of praise when the struggler realised his conscious acceptance with God. The spiritual birth-rate that night was high.”

The influence spread more or less over all classes in the town, and not a place in the circuit failed to share in the visitation. Times and again, as the weeks sped on, men and women by the dozen crowded the penitent forms. A rich harvest was gathered at Seaton Delaval, Cramlington, Dudley, Howdon, Cullercoats, and other places, as well as in North Shields; and the circuit’s numerical returns for 1868 and 1869 show an increase of six hundred members for the two years.

Colin had a significant influence over the intellectual culture of the Primitive Methodists. He inaugurated ‘Preachers Associations’ which did much to stimulate reading and study among the ministers and laymen. He was associated with the founding of the ‘Ambassador and Quarterly Review’ and edited it from 1855 to 1896. He was Connexional Editor during the period 1876-1887 and did much to revolutionise the connexional magazines, lifting them to a higher literary level.

Colin was elected President of Conference by a unanimous vote in 1880, a unique distinction at that period.

Expository Discourses on Chapters 5-7 of the Epistle to the Romans, 1875 (with Thomas Greenfield)

Wonders of Grace; or, the influence of the Holy Spirit manifested in upwards of three hundred and fifty remarkable conversions , 1879 (with Henry Woodcock)

The Life of Hugh Bourne: Founder of the Primitive Methodist Connexion , 1892 (with William Antliff)

Colin married Mary Law Jackson (1833-1854) at Northallerton, Yorkshire in 1852. Census returns identify one daughter. (Note: His obituary records that on Mary’s death he was left responsible for three small children.)