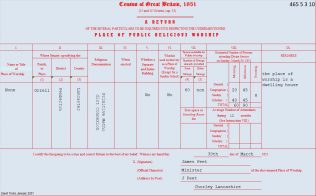 zoom
Orrell: return from the Primitive Methodist preaching place to the 1851 Census of Places of Public Religious worship. Return no: 465 5 3 10
provided by David Tonks 2021

There was a Primitive Methodist society established in the mid 1840s in Orrell near Wigan and over the next fifteen years or so the society grew and fostered a Sunday school, all in a rented room in a dwelling house. In the 1851 Census of Places of Pubic Religious Worship, the minister James Peet of Chorley, reports that there were morning and afternoon services, with 45 adults and 45 Sunday school scholars attending the afternoon service.

The foundation stone for Orrell Primitive Methodist chapel was laid on June 20th 1859 by JW Glover Esquire. Speakers at the ceremony included A Kirkland, who wrote about the occasion in the Primitive Methodist magazine, and Rev W Roaf, (Wigan, Independent).

About sixteen years ago this village was missioned by the Primitive Methodist preachers ; they found it in a wretched state, but the word of the Lord soon took effect on the hearts of the people, several were converted from the error of their ways, and a society was formed, which worshipped for twelve months in a cottage. A room was then rented, and a Sabbath -school commenced, which after struggling through many difficulties, is now doing well, though for the last three years it has had to suffer much inconvenience for want of more room.

During the last summer, a very suitable plot of land was obtained, on lease for 950 years, at three half-pence per yard ; the ground is 14 yards by 45. On the front portion of it a new house for the Lord of Hosts has been erected, and was opened for divine worship October 10th, 1859), when two sermons were preached by Mr. Thomas Ashton, of Wigan (Wesleyan), and the sum of£12 12s. 2½d. was collected. October 23rd, sermons were preached by Mr. J. Peet, of Bury, and one by Mr. J. Ball, of Wigan, and the collections amounted to £10. October 30th, sermons were preached by the writer, and Mrs. Kirkland, of Chorley, when the sum of £13 16s. 7 ½ d. was realised, making a total for the three Sabbaths of £36 8s. 10d. The congregations were large, and a divine influence attended all the services.

On Monday, November 21st, a tea-party was held, which ended the opening services of this beautiful little sanctuary. Though the evening was wet, about 140 per sons sat down to tea; a public meeting was held afterwards, which passed off well. The size of the chapel is twelve yards by ten, and sixteen feet to the ceiling. It is built of brick, the walls are a brick and a half thick, with a cavity of two inches, to prevent damp. The total cost including deeds, etc, is £255, towards which £135 have been raised, including donations, opening services etc, leaving £120 debt, which we intend to reduce to £100 as soon as possible.

The church is still active, in a later building, in 2017. A picture of the 1859 chapel can be seen on the church website at:   http://www.orrellmethodistchurch.com/page19.html