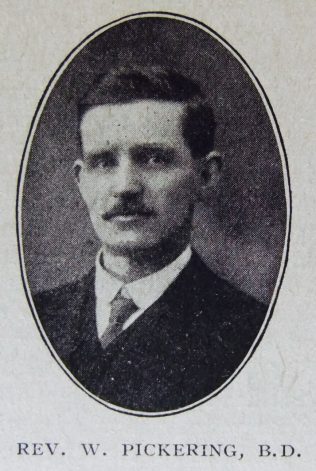 WILLIAM PICKERING, B.D., the son of Ralph and Elizabeth Ann Pickering, was born on October 4th, 1873. If to be well ancestored is a great dower for life’s career, then our brother had a goodly heritage. Much has been said concerning his forbears on the Pickering side in the Aldersgate Magazine (June, 1917). Much might also be said concerning the maternal line of ancestry for two or three generations back. To his mother, the son was not a little indebted. Her cheerfulness under constant pain for many years, her brave, uncomplaining fight against harassing difficulties, her unbroken spirit and her quiet patience under many sorrows, have given to all who know her an illustration of how grace can beautify a Christian character, and have greatly endeared her to all her children. In his early days William Pickering gave promise of his future career as a student, but the demands of a large family, of whom he was the eldest, necessitated that he should go early to work. Yet whilst working hard during the day as a stonemason, his thirst for knowledge found expression in attendance at evening classes at Rutherford College, where he won a science scholarship tenable at South Kensington. There he spent three years (1896-99) and took the A.R.C.S. diploma with a 1st class in chemistry. But his after-thoughts turned towards the ministry, and there is no wonder at this, for from his early years he had been brought into association with religion, so much so that he once said he could never fix a date to his conversion. He was taken to Nelson Street Sunday School when quite little, by his father, and he never left it until he went to London. Even in the midst of his educational work he seldom missed the week-night service. Moreover, with two cousins ministers, his father and brother and two uncles local preachers, it may be said that preaching gifts and qualities ran in his blood. He was put on the plan of Newcastle First Circuit by Rev. A.T. Guttery about 1895. In 1899 he was admitted to our Hartley College in order to prepare for the ministry. Here he had a very successful career, taking a high place in the exams, twice being first and twice second on the lists. In 1901 he was stationed at Stanley, Co. Durham, where he secured an abiding place in the affection and regard of the circuit At the close of a three years’ probation here he married Miss Weightman, who is now left with her two boys to mourn her great loss. In all their circuits she has proved a loyal comrade and helper, and in the sudden and unexpected blow that has befallen her has evidenced a spirit of noble fortitude and Christian restraint. Stanley, Jarrow, Ashington (six years) and Shotley Bridge – a period of 16 years on these circuits constituted the whole term of his ministry. The brief record of his success thereon may be traced in the Conference minutes, but no record can be given of the influence of his strong and radiant personality. He has passed away, but he lives in the work he accomplished, for into the work of those circuits he flung himself with all the ardour of his nature. And the general verdict upon his career, reiterated again and again since his death, is that “he was a hard worker,” tireless and indefatigable in seeking to promote the welfare of the churches. Many of the weeks of the winter were given up to evangelistic services at various places in the Ashington Circuit, and in Shotley Bridge he was pursuing a similar course, and successfully. It was during his stay on the former circuit that the work for the London B.D. degree was undertaken, and whilst on the latter Circuit he had taken part of the course for the BA.  In the impression he has made on other lives also he lives.  Remarkable testimony to the power of his life and character has come to hand since his departure, and his death has been the cause of real and widespread grief. Larger prospects and wider fields of service were opening up for him. He had served four years on the Candidates Exam. Committee and had just been elected upon the Probationers’ Exam. Committee. At the time of his death he was engaged preparing the Sunday School Lessons for the Magazine for 1918. They were not completed, however, for he was stricken down in the midst of his task. He struggled hard against the illness that was upon him, and took the service on Sunday, June 17th, at Ramshaw, a village far away amongst the hills; but after an attack of meningitis he passed away on June 29th, 1917. The funeral service, held in Blackhill Chapel, was largely attended by ministers and laymen from all over the two Northern Districts. Whilst the smart of grief and a keen sense of pain and of loss were felt, yet underneath it all one realised there was the sense of triumph – the triumph of one who had run well and reached the goal. In the peace and sunshine of a summer’s day we laid him down to rest – the labourer’s task over and his work accomplished — J. A. WEST.

William was born on 4 October 1873 at Newcastle upon Tyne to parents Ralph and Elizabeth. Ralph was a merchant’s clerk (1881) and later a sauce manufacturer (1901)