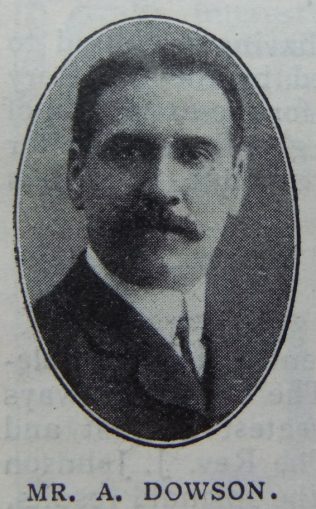 Mr Albert Dowson, late of Packakariki, New Zealand, was the son of Mr. Henry and Mrs. Dowson, Winesbank, Sheffield, and sprang from a family which has for many years played a large part in the affairs of Primitive Methodism.

Mr. Dowson spent his life on what is now Sheffield Tenth Circuit, and was Society Steward at Meadow Hall. He was born February 8th, 1879, and passed away November 4th, 1907, in his 29th year.

Before he was twenty-six years of age, he lost his wife after thirteen months of what promised to be an ideal union. Some time after he decided to emigrate to New Zealand. Possessed of great ability as an engineer, and of robust, hopeful disposition, and withal uncompromising in his loyalty to what was upright and good, there seemed every prospect of a successful future.

Before he had settled in his new home many weeks, news reached him of the death of his eldest sister and the protracted illness of his mother. Soon his own call arrived. With only a few days sickness, followed by operation for appendicitis, our brother succumbed to the frailties of this mortal life.

Brief as was his sojourn in the distant land, on all hands the testimony is the same: an earnest, loyal, Christian worker; a capable and conscientious servant; a willing and devoted friend. The Rev. J. Crocker, of New Zealand, who associated himself with the deceased from the time of his landing, in a brotherly letter of sympathy to the parents conveying the sad news, spoke of his unfailing trust in God, his courage in facing the operation with little hope of recovery, the bright Christian testimony he offered those who tended him, and his fond remembrances of home and father and mother.

An impressive memorial service was held the following Sunday evening in the Parish Church. May God mercifully console the stricken and invalid mother and father, and bless them in the happy knowledge that the sons and daughters who remain, in their turn are setting forth the virtues of the consecrated life.