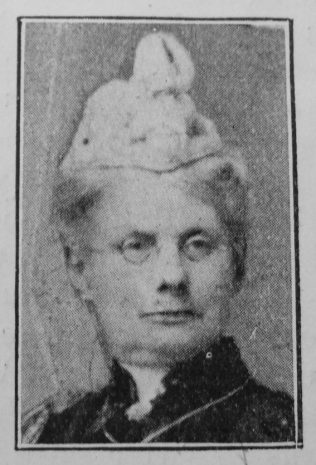 Transcription of Obituary in the Primitive Methodist Magazine by J.D.

Mrs. Joseph Dinnick, whose maiden name was Emma Jane Andrew, was born at the farmhouse, Sutterby, Lincolnshire, April 2nd, 1837, of godly parents, her father being a Wesleyan local preacher, closely related to Scott, the commentator, and cousin of Sir Gilbert Scott.

At East Grinstead, Sussex, whither her parents removed when she was four, there was no Methodist cause; her father opened his kitchen for services, and drove twenty miles each Sunday for the preachers. A second removal to Lingfield took the family beyond the range of Methodism and they had to attend the church, where Miss Andrew became co-teacher with the clergyman’s wife of the senior girls.

Dormansland, another farm of her father’s, was lent to the Primitives as a preaching station free of rent. The clergyman’s bitter spirit at this led Miss Andrew to attend a service, when a tinker preached on the ten virgins. Jeered at for attending this service she defended her conduct and then and there confessed Christ. The blessed witness she retained for the remaining forty-five years of her life. She joined the church in one of her father’s farmhouses and led several of the labourers to Christ. She became Society steward, which office she retained till her marriage in 1874 to Rev. Joseph Dinnick. She was a close Bible student, and read extensively in Methodist biography.

She had been four years engaged to a gentleman of high character, and the final arrangements for the marriage were in progress, when he intimated that he would not expect her on becoming his wife to attend dissenting meetings. She at once broke off the marriage and forbade him to call upon or write to her. Forty years afterwards he admitted that she was right. Many romantic stories could be told of her experiences as a minister’s wife – how that on going to their first station they found the house occupied by the minister who had been superannuated by the Conference, and who would not budge. With some difficulty a bed for the night was obtained elsewhere. This on leaving a comfortable home at the farmhouse. She nobly helped her husband in all the years that followed, leading classes, standing by him on the village green when a beginning had to be made without a single member, and regularly consecrating a tenth of their small income to God. She was a noble, dignified Christian, generously kind and wondrously sympathetic.

Rev. R.R. Connell says, “She was a woman of refined nature, with a beautiful, gentle, Christian spirit, an ideal minister’s wife.” Among the 200 letters and telegrams received occur such phrases as, “We all loved her and thought her a saint;” “How sweet, how gentle she was;” “Her deep religious experience and ever-flowing sympathy endeared her to us all.”

Some five years ago an attack of influenza weakened her heart, which was followed by a further strain consequent on the trial of giving her only child as a minister’s wife to the Methodist Church in Canada; and a chill in November, 1906, culminated in gastritis and heart failure. “I am going to see my Saviour,” she said, “and leave the world without one single regret. I have served my God and my husband and the church as fully as I knew how.”

On November 25th she dictated her last message to the church – Matthew vi. 33, and on the following day went home to God. She was laid to rest in East Finchley Cemetery amid many tokens of love and respect.

Emma was born to parents Benjamin Andrew, a farmer, and Eliza.