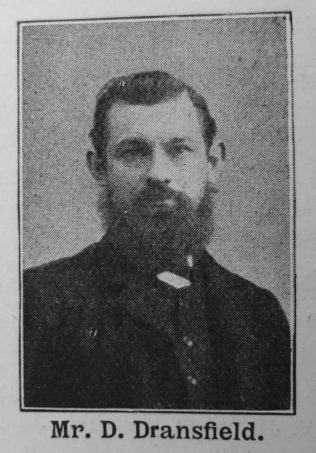 Transcription of Obituary In the Primitive Methodist Magazine by Geo. Ford

Our Church at High, Green, Sheffield III., has sustained a great loss in the death of Daniel Dransfield. He was born at Howbrook, Wortley, Yorks., April 6th, 1861, and died at High Green, in the same county, September 5th, 1899. His earliest associations were with the Established Church, whose ministrations he continued to attend till he was sixteen years old. At that time he was invited to attend the opening services of the Chapel, which the then newly-formed Society had just succeeded in building. He accepted the invitation, and that night became the subject of saving grace. His life was henceforth a devoted one. He first gave himself to God and then unto His people by the will of God. Possessing a rich, full voice, he used it “ever,” but “only for his King.” In open-air missions his services were invaluable, and when the Word had run with power into many a troubled soul, he sang peace when talking had no effect. But his powers were too varied to be exhausted in one form. He held every office, at one time or another, in the Sunday school and Society, and rendered distinguished service in dealing with the finances of the Trust Estate. In all his work he enjoyed the confidence of his brethren. He was diligent in the discharge of his duties, and wisely apportioned his time to the various claims, so that each could have due attention. His religion permeated his life; there was righteousness without and joy and peace within. It was a joy to know and be associated with him. “Men like your husband,” wrote the Rev. F. Jeffs in a letter of condolence to his widow, “make Church work happy and religion an attraction.” Prudent in business matters, he was a valued member in official life. His opinions were hiss own, and he held them as such, but nevertheless he possessed in a large degree that charity which “thinketh no evil and does not behave itself unseemly.” Constancy was marked in his entire deportment; the only change observable was that he went from “strength to strength.”

He was indeed a pillar in the Church, upon whom all seemed to lean, and yet the very soul of all the active forms of life in which the Church engaged. Why should he have been taken? is the question which has framed itself in many minds. The only answer is, God knows why.
“Our eyes see dimly till by faith anointed.”

Yet none with that anointing can doubt but what all is well. His removal will doubtless throw the Society more upon God, from which the greatest good must result. How often has it been that through such lives and the experience wrought within us by their removal, that such a thing as implicitly trusting God becomes possible? So in this case. The inscrutable mysteries of Providence are important lessons in our spiritual education. Are we equal to the learning of them? Every opportunity tests our spiritual ability. What will the future reveal?

From the many testimonies to our brother’s worth which have come to hand since his death, we are selecting the following as showing the many-sidedness of his character. Mr. A. Driver, a local preacher, writes: “I feel that I owe much to his pious example and the truly godly influence he had over me, and though brought up in a pious home, I can see the possibility of having gone wrong had it not been for his watchful care over me.” An official of high standing In the colliery where he worked, and who had entrusted him with an important undertaking of opening out a new seam of coal, writing to Mrs. Dransfield, says: “During the recent period in which I have seen a great deal of your late husband in his work, I formed a very high opinion of his abilities and sterling character, and am sure that his death is a distinct loss, not only to this colliery, but to the district, and amongst his fellows will be felt by no one more than by myself.”

The Company who owned the colliery did all in their power to aid his recovery, and showed him every kindness and consideration. The affliction to which he succumbed was the result of a sprain which occurred while at work, and although all was done that medical skill could do, he grew worse rather than better. At times his sufferings were excruciating, and he writhed in physical agony. Still no one thought but what he would recover. As a result of a medical consultation an operation was decided upon, which revealed the painful fact that a malignant cancer had formed, and from that time all hope had to be abandoned. Many friends visited him during his illness, and invariably came from his room the better for going in. The loving tribute of the one most dear to him is but the echo of many hearts: “I am really a stronger child of God now than ever l was before. How could I be otherwise in the face of all the beautiful trust I have witnessed lately, the calm, peaceful resting patiently in God’s hands for His will to be done, and at a time when his life was at the happiest.” He was never troubled with a doubt about himself. The valley was always light. His last struggle for life was long, during which time visions of glory enwrapped his soul. At times his face was radiant, and his voice distinct, at other times only the movement of his lips could be seen. Just before the end, his arm, which he had not been able to raise for hours, went straight up, and the hand waved three or four times, while the lips formed the words, “I’m coming.”
“And then a flood of light — a Seraph hymn,
And God’s own smile for ever and for ever.”

He was interred in the Burn Cross Cemetery, Chapeltown, in the presence of Circuit representatives and a large concourse of people, the Circuit ministers officiating. A marble tablet suitably inscribed has since been placed in the Chapel to his memory. Our prayers are for the blessing of God upon the widow and fatherless children.

Daniel was baptised on 12 April 1861 at Wortley, nr Barnsley, Yorkshire. His parents were James, a coal miner, and Jane.

He married Priscilla Chappell (abt 1860-1945) in the summer of 1885 in the Wortley registration District, Yorkshire. Census and birth records returns identify four children.

Priscilla worked as a grocer and draper following Daniel’s death.