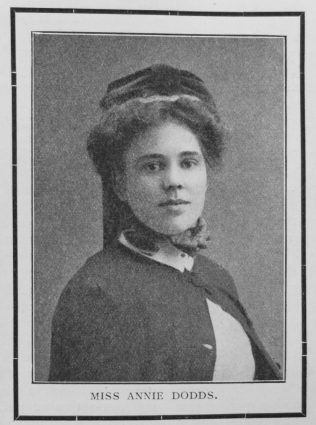 Note: This tribute, published in 1911, reflects attitudes towards native Africans that we find unacceptable in the 21st century.

Transcription of a tribute by the General Missionary Secretary

THE news that Miss Annie Dodds, the Matron of the Native Girls’ Institute, Jamestown, West Africa, has died of Blackwater fever, has done more than move our Churches to grief. It has reminded us of the heroism of missionary labour, and it has laid upon our conscience the imperative of missions.  When brave men and women hazard their lives to bring degraded races within the light that streams from the redeeming Cross, it would be a scandal for us to cripple their labours by failing to provide them with generous resources and complete equipment. We dare not begrudge the cost of missions, when valiant comrades are ready to lay down their lives in this greatest of all causes.

Our Society has been most fortunate in that it has had to mourn but few deaths among its staff. We have been the envy of other missionary societies upon the West Coast, and the policy of careful selection, combined with medical training, has been abundantly vindicated. There will always be an inevitable risk in tropical labour, but we do well to exercise the utmost caution in the appointment and training of men and women who are to plunge into the arduous labours involved in the education and evangelisation of the tribes of Southern Nigeria. There must be no panic, the Blackwater fever is common to all parts of tropical Africa, but the new grave calls upon us to guard the life and health of our comrades as our most precious treasure.

The appointment of Miss Dodds to the Girls’ Institute was an ideal one. She was called to the work after much thought and was chosen out of many candidates; she accepted the call after much prayerful  deliberation. Physically, she passed with success the most rigorous tests, she had full training as a nurse, she faced intelligently the hazards that were involved in the appointment. In temperament and mood she was perfectly adapted to the climate, and her sudden death is a mystery, before which we can only bow in holy and trustful submission. She was happy in her work, her health was generally good, with the exception of a malarial attack in March, and in a letter, received after the news of her death had reached us, she speaks of her own good health. She was just completing her first term and eagerly anticipated her fourlough in the Homeland, with all its social delights, when the call came to higher service. None will doubt that, when the Master spake, she was willing to seal her missionary witness with her life.

Our loss is greater than words can declare. Anyone privileged to possess Miss Dodd’s friendship, and to have her confidence will realise how difficult it will be to fill her place.

She was modest in her manner, calm in her mood and resolute in her judgment. She had strong convictions, though she always declared them in quiet tones. She was conscious of the greatness of her task, and doubted her own powers, but when she had finally accepted responsibility she carried it with a resolute dignity that was most impressive. Her devotion sought no recognition, she shrank from the public gaze and never coveted applause, but she was passionately conscientious, and craved the approval of her Lord. She had an infinite patience; she realised that results would be slow in coming. In all her reports this spirit was visible; she was ready to do the duty nearest at hand and leave the results to the God of Missions. Her judgment was true and her advice was eagerly welcomed by many who possessed more pretentious gifts. She was a restful woman, and in the social circle her very presence breathed the benediction of peace. She was at her best among her own kindred; she shrank from society, but among her own people she won an admiring and trustful love that bleeds to-day in the agony of an unspeakable loss.

She was cultured in the best sense, though she never posed as a scholar; her literary taste was wide and deep; she loved great books and had a quiet scorn for all that is shallow and sordid. Her intuition was remarkable, and in her determination to get behind the African mind and investigate its deeper processes, she showed an insight that would surprise many who only knew her as a shy and winsome maiden. She had not neglected the study of comparative religion, and could appreciate every ray of light in the rude faiths by which the African would grope his way to the Great Spirit, and, at the same time, she had an intense and intelligent grasp of the supremacy and sanctity of the Evangel of the Cross.

Life to Annie Dodds was a solemn thing ; it was saved from sadness by her loyal faith in the Lord of all the morrows. She fought her way to confidence, and trust in her case was no easy acceptance of a creed or code, but a victory won on the battlefield of her own soul. As a result, she had a rich fund of sympathy, for it is only those who have suffered who can feel for the perplexities and woes of others. She could never become the professional Christian; she was always the wholesome, natural woman, rich in the charm and tenderness that made Bethany holy and that only come from personal fellowship with the Lord of grace. Cant was offensive to her; for her to talk glibly on the deepest things was impossible, but when testimony was needed to give light and comfort to others, then her womanly soul was eager to pour forth its treasures of holy experience. She craved no idle moments, frivolity had no attractions for her. She found her relaxation in fresh tasks and new studies. Her nerves were steady, her temperament was even, but she never quite escaped the thought that life was a task to be fulfilled and a burden to be borne. Responsibility was the keynote of her character; she made no fuss about it, but was always conscious of its presence, and when we learn the details of her death we shall find that in fidelity she laid down her life.

She was genuine in her devotion and wealthy in her sacrifice. She gave up a career in London in which she would have won distinction as well as affluence; she surrendered friendships that were most precious, and passed out of a family circle of which she was the magnetic centre. She bore quietly the loss of pleasures and pastimes that are dear to maidens of her age, and she did it all without lament; it was the natural and spontaneous gift of her love for her Lord.

We prized her devotion, trusted her judgment, admired her gifts and anticipated for her many years of African service. It was not to be. The good God had another sphere for her to fill and another witness for her to give.

Annie left Liverpool on 6 June 1910 bound for Calabar, Nigeria in the ship Dakar.

This link pictures Annie’s grave in the European graveyard at Calabar, Nigeria.

The above link is to the Primitive Methodist Leader of 26 October 1911. This records that before becoming a Missionary Annie had been a nurse associated with Brixton Nursing Institution. She had been interviewed for the post at Jamestown by Rev. A.T. Guttery. This article also speaks of her brother being a missionary. Was this Frederick William Dodds (1883-1966)?  Frederick had a sister Susannah (born in late 1884 at Wrangle, Lincolnshire) who could be this Annie.