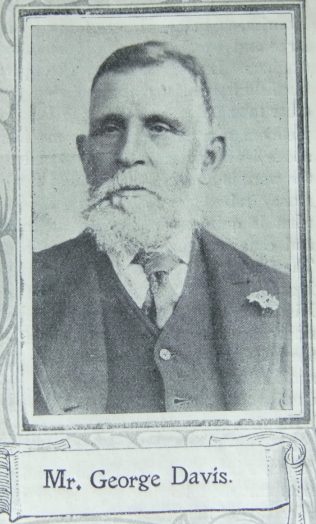 Mr. George Davis is the Senior Circuit Steward of the Bristol Fifth Station and was elected when it became a station. He has held the office of Chancellor for a period of thirty years. He is a lifelong Primitive Methodist who has passed through the Sunday School at Mangotsfield into the Church. He has been a teacher of the school in which he was a scholar, and is still at the age of seventy-two interested in the welfare of young people. His family have all become workers in our church. Though never a local preacher he has upon occasions ably advocated the cause of the Christ he loves. He became a member in 1856. In early life he was a collier, but failing sight and age compelled him to relinquish the employment: and today he is a grocer with a prosperous business managed by his daughter. His name in the district is untarnished and his influence potent for good.

George was born abt 1837 at Mangotsfield, Gloucestershire, to parents George and Hannah. George, senior, was a coal miner.

Census returns identify that George had become a grocer by the time of the 1881 census.