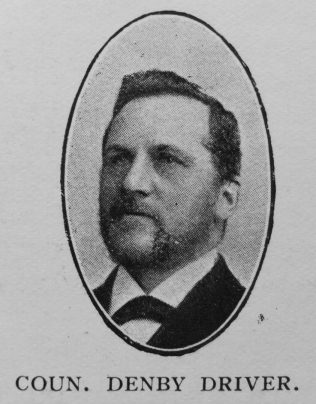 Transcription of obituary published in the Primitive Methodist Magazine by A.D. Hartley

When the hoisting of half-masted flags at the Town Hall and other Municipal buildings in Keighley on the 16th June last intimated the “passing” of Councillor Denby Driver, the whole town was shocked, for it was known only to a few that Mr. Driver had proceeded a few days before to a private nursing home in Leeds to undergo an operation for an internal complaint. The operation had been performed, but alas! after a few days of anxious waiting, with fatal termination.

Mr. Driver was born at Keighley fifty-five years ago. When about twenty years of age he commenced business on his own account, and established a foremost position amongst the tradesmen of the town. He was a past President of the Tradesmen’s Association. For nearly nine years he served his fellow townsmen with efficiency and success on their Town Council, and had been Chairman of the Tramways Committee. His civic colleagues held him in high esteem.

A Primitive Methodist by early training and conviction, Mr.  Driver’s work for his Church was prodigious. Foremost in all Circuit work, he also was a member and regular attender of the District Committee, the General Committee, the General Sunday School Committee, the Executive of the latter, and the Centenary Committee. Several times had he been delegate to District Meeting and three times to Conference. It was during the Tunstall Conference that his death occurred, and on the day of his interment he was appointed to occupy one of the platforms at the Camp Meeting.

Denby was born on 8 January1856 at Keighley, Yorkshire, to parents Thomas Driver, a spindle maker (1861), and Elizabeth Denby. He was baptised on 9 March 1856 at Keighley PM Chapel by John Morton.