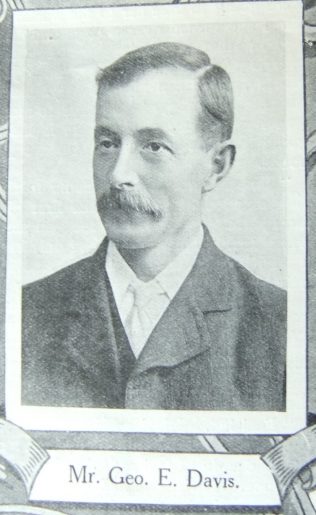 Mr. George E. Davis was born at Bloxworth, in the Poole Station, in 1869, hence he has reached his fortieth year. He was converted in 1888, reaching full plan in 1891.

He is a man of sterling character and abounding energy, both in his calling as a farmer and in all that concerns his Circuit. His kindliness of spirit has won for him the full esteem of his brethren, who have shown their appreciation by electing him to the Office of Circuit Steward of the Blandford Station for the second time, which office he has held for four years.

He is punctual in attending to his appointments, being always warmly received, as the brethren believe in him.

His reputation lives and will live. We predict for our brother a growing future. Happy is the minister and Circuit blessed with the co-operation and services of such a Steward.

George was born in 1869 at Bloxworth, Dorset, to parents Robert Edwin Davis and Miriam Arnold. Edwin was a woodman and later a farmer.