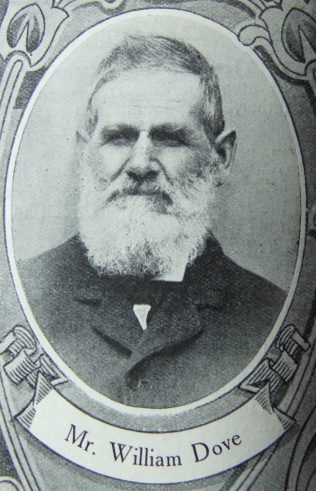 Mr. William Dove, the subject of this sketch, was born at Hinderclay, in Suffolk.

At the age of twenty years he fully decided for Christ, and at once united with our society at Rockland Fen Street, in the Rockland Circuit.

During his 45 years membership, it has always been his joy to attend the means of Grace, and to help on the work of the church to the best of his ability.

He has been a local preacher for 20 years; also trustee and treasurer for several chapels on the Circuit.

For several years he served as assistant Circuit Steward, and for the last three years he has been the Senior Steward.

He gives much of his time to the various interests on the Circuit, and finds in such work a real pleasure. No journey is too far, no weather too bad. The pleasure of his life is to serve the church.

May he be long spared thus to serve.

William was born abt 1844 at Hinderclay, Suffolk, to parents John and Elisa. John worked the land.

William spent a short while circa 1871 as a labourer at an engine manufacturers at Ecclesfield, South Yorkshire before returning to farm in Norfolk.