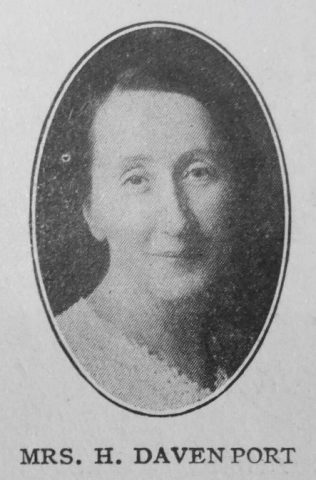 By the passing of Elizabeth Ann Davenport, the devoted wife of the Rev. Henry Davenport, the Sandbach Circuit has suffered a great loss. Born at Sunderland on November 26th, 1874, in early life she joined our Tatham Street Church and from this time until she was married to the Rev. H. Davenport in 1920, her connexion with that Church and school was unbroken. She entered heartily into Christian service and for twenty-five years had sole charge of the young women’s Bible class, and the Junior Society of Christian Endeavour.

In sewing meetings and other efforts she took a leading part. In the circuits she travelled with her husband, Walkden and Manchester VIII, she was much esteemed for her sympathy, kindness and service. At Winterley she continued her work for Christ and the Church, and the Sandbach Circuit looked forward to many years of devoted service from her and her esteemed husband.

For three years she served splendidly as the president of the Circuit Branch of the Women’s Missionary Auxiliary and was a very devoted member and worker of the B.W.T.A.

Possessing a serene and gracious spirit, she endeared herself to all with whom she came into contact. She was loved for her work and worth and she leaves many precious memories. She passed away on April 17th, 1929, and was interred at Christ Church, Alsagar. The funeral service was conduct in our Winterley Church.

Elizabeth was born on 26 November 1874 at Sunderland, Co. Durham.