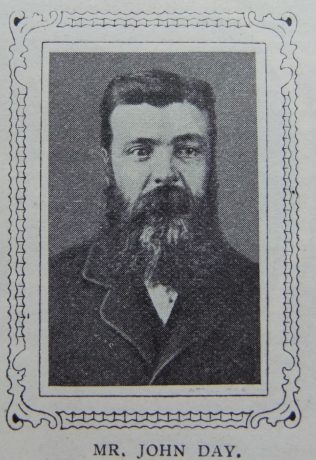 Born in the year 1838, Mr. John Day, of Marr, in the Mexboro’ Circuit, still retains sufficient physical vigour to follow his daily toil, to attend all the religious services of the week, including his Sunday Morning Class Meeting, and to be in request at Quarter-day for services in the Circuit, for he is a local preacher as well as Class Leader.

In this village of 135 total population with an Anglican Church and resident clergyman, we have a society of eighteen members, a congregation of forty or fifty week by week, and a Sunday School of thirty scholars, which speaks for itself of the power of our little Zion. After giving a place for the influence of other faithful souls in this society, the fact that Mr. Day has had an unbroken membership with it for forty-two years, and has been the Class Leader and Society Steward thirty-five, accounts for much of its prestige and influence.

Though Marr is on the boundary of the Circuit, any local preacher will take an appointment there; and even the older men, as springtime returns, say, “I would like to be planned at Marr again.” This has its explanation in the hearty character of the services, and the fact that Mr. Day’s house is often the home for the day; thus some honour falls to Mrs. Day, a faithful disciple of Martha, who shares the credit with her husband in everything that pertains to the welfare of the society.

His work in the Class Meeting is done in the old way; his members give their testimony, and to each he gives counsel, which consists of wisdom culled from the devotional works of Puritan and Free Church Leaders, together with a store gathered out of life’s experience.