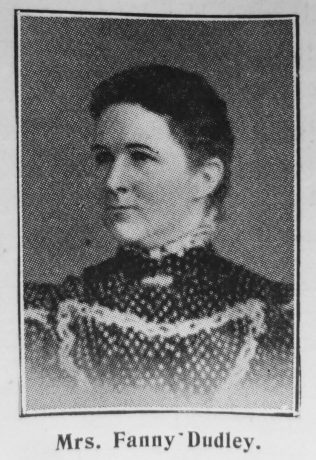 Transcription of Obituary In the Primitive Methodist Magazine by J. Travis

SCHILLER says, “The best women, like the best-ruled States, have no history.” The world does not know how much it owes to noble-minded and devout women, who have no history except in the Lamb’s Book of Life. Men who have attained to eminence in the State, in the pulpit, at the bar, in literature, in science, in art, and in business, have been more indebted to the influence and help of their wives than they have themselves often been aware of or the public have ever suspected. We endorse to the full the observations of the shrewd American thinker when he wrote, “The greater part of the purifying influences exerted upon the world springs from comparatively obscure wives, mothers and sisters, who have learned the noble duties of their positions. Their vocation cannot be too highly exalted; it demands the exercise of heart and brain, it asks for the highest qualities a woman can possess, but success in it means the greatest reward obtainable – a pure home, a world made better, power and influence a queen might envy, and eternal happiness secured.”

These thoughts come into our mind as we sit down to pen a brief account of the late Mrs. Fanny Dudley. She was the daughter of the late Mr. and Mrs. Cook, of Irby Hill Farm, near Birkenhead, and was born at Ightfield, Salop. Her mother was a most godly woman, and held the office of Society Steward at Irby for more than twenty years.

When Mrs. Dudley was six years of age she went to reside with her uncle and aunt, the Rev. Thomas and Mrs. Bramhall, and remained with them until she entered the marriage state. The careful training and consistent example of this worthy couple were potent factors in the development of her intellect and in the formation of her character, and to the end of her life they lived in her affections.

When a girl she was sprightly, deferential and exemplary. She began to follow the Saviour so early in life that she could not fix the exact date, but it was not until she had reached her sixteenth year that she joined the Church. A year later, under a sermon preached by Mr. James Manley, now of Altrincham, she felt that she ought more decisively and more publicly to confess Christ, and she did so. The result was, she entered into a more definite and a more inspiring Christian experience, and became fired with a more fervent zeal for Christian service.

She became the wife of the Rev. John Dudley in July, 1880. The experience she had of the manifold life of a Primitive Methodist minister’s family, while residing with her foster parents, was of great service to her when she entered into the enlarged opportunities and responsibilities of a minister’s wife. It is not too much to say that, by the blessing of God, she proved herself in every respect equal to her station. Her first care was her own home. She felt that nothing could compensate for a neglected home, therefore she did all she could to make a truly Christian home. Of her it could be said, without reservation, “She looketh well to the ways of her household, and eateth not the bread of idleness. Her children rise up and call her blessed: her husband also, and he praiseth her, saying: many daughters have done virtuously, but thou excellest them all.”

She did not, however, allow her home to absorb all her thought and energy. She took a practical interest in the varied work of the Church. The cause of missions was near her heart, and in her youth and in her womanhood her gifts and collections amounted in the aggregate to a large sum. She took delight in Sunday school teaching, and, from the age of fifteen, except for brief intervals, when the pressure of family duties rendered it impossible, she was engaged in this holy service. She put conscience and heart into her work, and prepared her lessons with care and gave them in a devout and prayerful spirit. Catechumen classes were formed by her in several Circuits, and conducted with success. Temperance work, open-air missions and evangelistic services found in her a sympathetic helper. “She spread out her palms to the poor; yea, she reached forth her hands to the needy,” and found a joy in having them in her home to endeavour to brighten and better their life. To many a sick and to many a sorrowing one she was an angel of God. She was a real helpmeet to her husband, not only sharing his sorrows and joys, but seconding his efforts to promote the financial and spiritual interests of the Church. No wonder that his orphaned heart sighs so deeply over the loss of one to whom he owes so much of his joy and of his ministerial success.

The testimonies to her character and worth sent by ministers and laymen, as well from organisations, are too numerous to be inserted in the space at our disposal. We can only give samples. The Rev. T.H. Hunt writes:- “She was a woman of rare virtues, combining modesty with intelligence, meekness with fervour, devotion with cheerfulness, and was an honour to her sex.” An Accrington layman writes:- “We have not known Mrs. Dudley long, but we have been drawn to her as by some charm. She was so bright, so cheerful, so loving, and withal so pure.” Dissimulation and pretence were alien to her nature. Her piety was strong and amiable. As she went in and out amongst the people her unaffected courtesy and unassuming demeanour, were in every way befitting a Christian woman and the wife of a Christian minister, and won for her a place in the affection of those who were favoured with her acquaintance.

A few days before her death another was added to her family. Blood poisoning and other complications supervened, and on April 4th, 1900, she passed beyond the veil to be for ever with her Lord.

The funeral obsequies were conducted by the Revs. T.H. Hunt, D.S. Prosser and the Rev. J. Travis. An unusual crowd lined the streets in the route to the cemetery, and a large number of friends from far and near gathered round the grave. The coffin was covered with wreaths sent from Circuits in which she had resided, and one from the Mayor and Mayoress of the borough. Her body was laid to rest amid unmistakable signs of respect and affection, which were as deserved as they were numerous and sincere.

A memorial service was conducted in the Whalley Road Chapel, Accrington, on Sunday, May 6th, when Mr. James Manley of Altrincham, preached to a crowded congregation from the words, “She hath done what she could.” A marble tablet, with an inscription testifying to her loyalty to the Church and to her fervent service in the cause of Christ, has been placed in the chapel at Accrington by friends, and another in the Foxhill Bank Chapel by the friends of the two places to whom she had endeared herself.
The blessing of her quiet life fell on us like the dew,
And good thoughts where her footsteps pressed like fairy blossoms grew;
Sweet promptings into kindest deeds were in her very look,
We read her face as one who reads a true and holy book.

Fanny’s birth was registered in the summer of 1857 under the surname Cooke. The 1861 census shows her with Rev. Thomas Bramall. I have not been able to identify the names of Fanny’s parents.