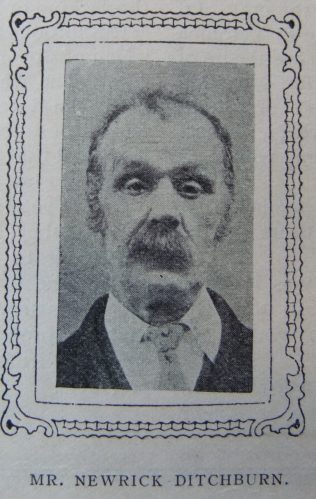 This native of Moorsholm is deliberate to the verge of slowness, yet withal tenacious in purpose and invariably reaches his ends. Newrick J. Ditchburn is a typical villager. He always knows where he is going and deliberately holds on his way.

This applies in his mind movements as well as in his outward work. He is original in his thinking, loves to analyse a text, and can justly estimate a sermon. The years have brought him fruitful ideas, which he turns to account in many ways.

Forty-five years ago, a Camp Meeting was held in Moorsholm, and the preachers enjoyed their work. After the lovefeast one of the preachers, moved by a holy boldness, placed himself with his back to the chapel door and effectively barred all exit. All present had perforce to stay to the prayer meeting, and conversions justified the preacher. From that service Bro. Ditchburn dates the beginning of his search for truth, though his conversion did not take place for some days afterwards.

He became Society steward forty years ago, and has held the office for thirty of the intervening years. He is steward to-day, with a stronger love for his church than ever, and will do his utmost for the success of the services. Indeed, Moorsholm Primitive Methodism would be sadly lacking without Newrick Ditchburn. His stewardship is eminently useful and faithful.

Brother Ditchburn has been a Class leader for thirty-four years, and a local preacher for twenty-nine years. How acceptable he is may be judged by his regular visit to one pulpit four miles from home every quarter for twenty-five years. A stalwart of village Primitive Methodism, Brother Ditchburn’s work is not all in the past.

Newrick was born in 1848 at Moorsholm, Yorkshire, to parents Robert, an agricultural labourer, and Martha. He was baptised on 15 July 1848 at Skelton by Guisborough.

Newrick was an underground ironstone miner.

Note: Census returns before 1891 record his forename as “Newark”