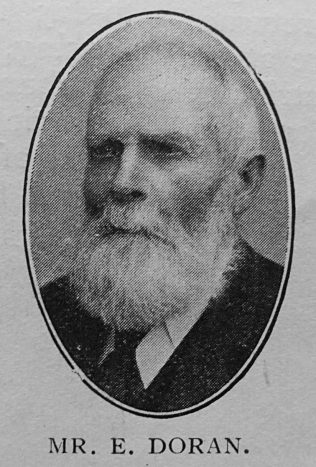 Transcription of obituary published in the Primitive Methodist Magazine by Albert E. Rose

Mr. Edward Doran, of Thetford, was born in 1821 at Thelnetham, Suffolk. He joined Hopton Society in 1823, and to the end of his life took a deep interest in its welfare. For a time he acted as hired local preacher on the Brandon and Soham Circuits. Rev. George Edwards said of Bro. Doran:—”He belonged to a race of men of strong convictions, sincere piety, evangelistic habit and temper. A man of great energy and consuming passion, his life purpose might be summed up in the words of Paul, ‘This one thing I do.’ “ One of his old friends, speaking to the writer, said, ‘‘He was an old lion,” a sentence strikingly suggestive of his dauntless spirit.

He was for many years, and up to the time of his death, a class leader. The office of Circuit Steward he resigned four years ago owing to his great age. He had been for 15 years a member of the old School Board.

The end came with great suddenness. On Saturday, September 25th, he was seized with a stroke, and slowly sank until Monday, when he passed away, leaving two sons and a daughter to mourn his loss. He was followed to the grave by a host of admiring friends, Revs. Geo. Edwards, Robert Betts, A.E. Rose, and C. Finlay taking part in the ceremony.

Edward was born in 1821 at Thelnetham, Suffolk. I have not been able to identify his parents in online records.