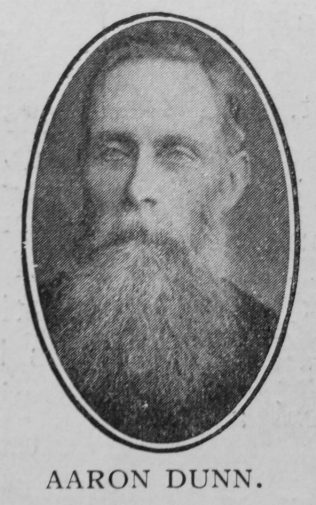 Transcription of obituary published in the Primitive Methodist Magazine by  F. Hobson

Aaron Dunn entered into rest September 4th, 1911, at the ripe age of seventy-eight years. Born at Newton-under-Roseberry, in Cleveland, his conversion took place at ten years of age, and for sixty-eight years he was a member of our Church, Forty-six years ago he removed to Tyne Dock. He was present at the opening of the Lord Nelson Street Church in 1868, and was devoted to his Church.

For some years he was a Class Leader, both at Tyne Dock and Boldon Colliery. Daily he sought the Lord in prayer and studied the Holy Book. He was diligent in attendance at all the means of grace.

For many years he was an active official in the “Sons of Temperance.” By his steady, quiet, even temperament and upright Christian character he won the respect of a wide circle of friends.

For over two years he has been greatly afflicted, but endured it with Christian fortitude, and found comfort in the assurance of the love of God. He was laid to rest in the Simonside churchyard, Rev. F. Hobson officiating, and the “Sons of Temperance” read their burial service.

Aaron was born in 1833 at Newton-under-Roseberry, Yorkshire, to parents Robert Dunn, who worked the land, and Sarah Lilburne. He was baptised on 2 October 1833 at Newton by Guisborough, Yorkshire.