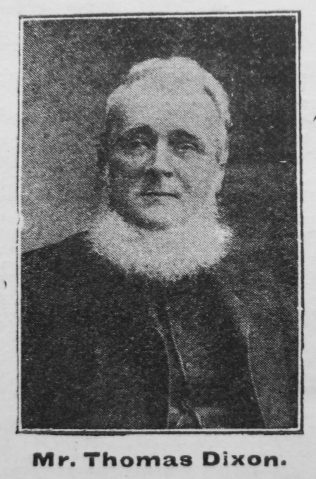 Thomas Dixon was born at Alston, Cumberland, in the year 1825. His parents were in the habit of attending the Presbyterian Church. Young Dixon, while yet a lad, came under the influence of Primitive Methodism, and at about the age of ten gave his heart to God. In 1841 he became a member of our Church, and maintained an honourable and unbroken membership until his death. After joining the Church, while yet a youth, he became an ardent worker, attending cottage prayer meetings, in which he always took an active part

His educational advantages were few. Being the eldest child, he had very early to assist his father, who was a tailor, to maintain the family; but though deprived of much education, he was a youth of good natural gifts, which fitted him for public work. 1844 he became a local preacher on the Alston Station, where he laboured successfully until in 1862 he removed to Gateshead, where he identified himself with our Nelson Street Church. Shortly after the Mission in Prince Consort Road was commenced he threw in his lot with the pioneers of this new project, through whose combined efforts this cause was built up, and the new church erected which now stands at the head of Gateshead Second Circuit. Here, for many years he laboured faithfully as class leader, trustee, and local preacher. His interests and aims were almost entirely Connexional. Our Church never had son more loyal to her doctrines or more faithful to her polity. He loved official life, and highly appreciated official honour. Many times was he elected to represent his circuit in District Meeting, and three times he was chosen by his District as a delegate to Conference.

As a local preacher he rendered magnificent service for nearly sixty years. Possessed of a strong physique, commanding presence, a fluent utterance, and a voice at once powerful and musical, his services were in constant demand, especially for camp meetings and outdoor demonstrations. In his prime he gloried in his strength, and during his last days he loved to tell of his many outdoor triumphs, ranging over a wide district, his voice being heard on some occasions as far as a mile away. He was no recluse or great book-worm, but essentially a man of action. He had many of the characteristics of the dalesman, such as independence, courage, intensity of conviction, fidelity, honesty, and strength of will. He possessed, too, a certain pugnacity of temper, but beneath what to strangers might appear severity there was ever a most genial and kindly disposition. Being sensitive, he felt intensely any slight, and appreciated most highly any kindly recognition. As a friend, he was genial, frank and faithful. Being hopeful in temperament and aggressive in spirit, his outlook was fairly broad, so that any forward movement was sure to elicit his sympathy As a staunch total abstainer he was ever on the side of temperance reforms.

His decay was gradual, and with age there was a manifest mellowing of his eager spirit. For many months before the end he had been laid aside with illness, during which time it was the writer’s privilege to often converse and pray with him. Those days of weakness were at times a trial of his faith. But through all he maintained a sure hold of Christ, as witnessed by his hearty responses to our prayers and answers to our enquiries. Before the end there was a growing desire to be released from the uninhabitable tenement and to enter “the house not made with hands.” That wish was realised on July 17th, 1902, when he departed “to be with Christ, which is far better.”

The old order changeth; may the new be worthy of the old – of the men who have left behind them such noble examples of honesty, manliness, fidelity, and disinterested Christian service.

Thomas was born on 12 July 1825 at Alston, Cumberland to parents James and Ruth. He was baptised on 25 March 1827 at Alston Independent Chapel.

Judging by the birthplaces of his children, John had moved to Gateshead by late 1855, not 1862 at stated in the obituary.