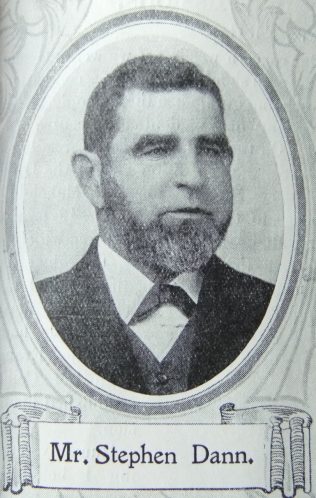 For eight years Mr. S Dann has held the office of Circuit Steward of the East Dereham Station. During that time he has honoured the obligations of his office with willing faithfulness. He takes the liveliest interest in all that goes on in the circuit and has rendered large practical help in the three new chapels, being a trustee in each case.

He is a successful farmer and has the reputation of being a good master. His home is the rendezvous of many of the ministers, and all find the heartiest of welcomes. A stay at Old Hall Farm, North Tuddenham, has brought recuperated energy and fresh fitness for service. Mr, Dann realises the value of Sunday School work and as superintendent is always at his post giving his best. He has represented his circuit several times at District Synod and has attended several Conferences, being a delegate at the last Conference in London.

Stephen was born in 1854 at Great Witchingham, Norfolk, to parents John and Elizabeth. John was a farmer.