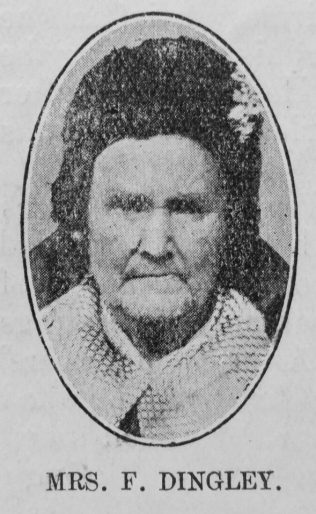 Birmingham Street Church, Halesowen, has lost its oldest member in the person of Mrs. Dingley, mother of Mr. John Dingley, who passed up to God, March 4th, 1909, at the unusual age of eighty-six years. She made the great decision in her sixteenth year, and for three score years and ten had an unbroken and honourable connection with our church. She was a Primitive Methodist of the old type, the foundations of her religious life were well and truly laid in a genuine conversion.

With others she had the high honour and holy joy of accompanying Hugh Bourne in a missionary propaganda to Woodgate and Haley Green, and in assisting a number of worthy friends in commencing the Birmingham Street Society. To such as she the cause was everything, and duties  some think menial, were by her undertaken with a glow of heart that made the angels smile.

She was married to Thomas Dingley— who for fifty years was school superintendent — November 12th, 1840, and until his decease, nine years ago, the twain toiled self-sacrificingly, giving of their best to the Lord and His servants. Frequently were the Lord’s ambassadors their guests, and it says no little for the Christian influence of this home that children, grand-children and other relations are walking in the truth. Our sister rendered no world startling ministry, but unobtrusively served her generation according to God’s will. It is quiet lives such as hers that count much to Him Who knoweth all. Week-day deeds of holiness in obscure nooks and corners are beyond all price.

Mrs. Dingley’s later record was one of patient waiting. In the full possession of her consciousness unto the last, she whispered to her devoted son, “The Lord has always been good to me and He will not leave me now.”

Her burial was attended by a reverent crowd, who came mid wintriest conditions to do her honour.

The lessons of her life were indicated at an In Memoriam Service, held on Sunday evening, March 21st, when the Rev. J. Pearce preached to a good congregation.

Census returns record that Fanny worked as a ‘nailer’ throughout her married life.