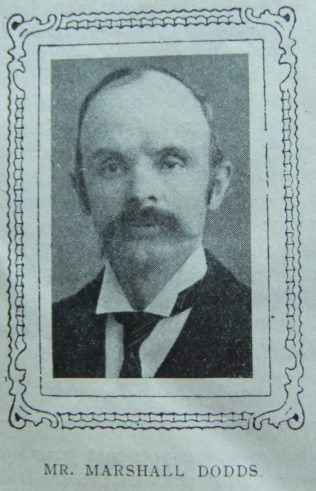 MR. DODDS came to Edinburgh thirteen years ago from the Hetton-le-Hole Circuit. In his boyhood days Hetton was included in the old Sunderland Circuit, which, in 1826, sent Thomas Oliver and Jonathan Clewer to carry the message of Primitive Methodism to Scotland. Since the first Class was formed in the Grassmarket weaving shed, there has been an unbroken succession of godly Class leaders who have preserved through all the chequered career of our Church in the Northern capital that form of Christian fellowship which has played such a significant part in Methodist history.

It was a bold venture for Edinburgh Primitives when they launched forth the Livingstone Hall project. Bro. Dodds was one of the stalwarts who rallied round their intrepid leader, the Rev. S. Horton, in that important enterprise. He became a Trustee and at the same time a Class leader, a position he had held several years before removing northwards. He is singularly fitted by nature and grace for this high and holy office. To a deeply spiritual nature he unites a wide and ripe experience, gained in the school of Christ. A godly ancestry, associated with ennobling spiritual traditions, counts for a great deal in the creation of our brother’s sterling character. His uncle, the Rev Adam Dodds, justly honoured for his splendid service in the North country, is referred to by our connexional historian as “Nathaniel” like. And something of Nathaniel’s guilelessness seems to have been inherited by Mr. Marshall Dodds. He is the soul of honour, of transparent sincerity and fervently religious. Converted at the age of sixteen, he has seen nearly forty years of Christian toil. Like his father before him he has rendered invaluable service as a local preacher.