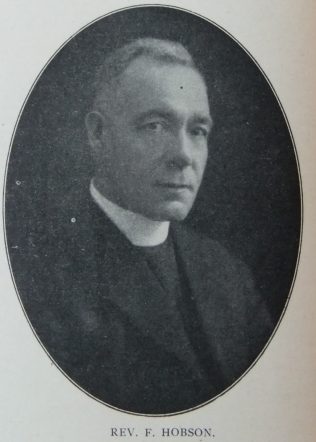 Frederick was born on 21 March 1875 at Darlington, Co Durham, to parents Frederick and Eleanor. Frederick, senior, was a cartman for the corporation (1881).

Frederick’s boyhood and youth were associated with the Greenbank Church, Darlington. He began to preach under the ministry of Rev Andrew Latimer.

As a youth, Frederick was apprenticed to a blacksmith. Before entering Hartley College in 1898, Frederick spent a year as lay agent in Newcastle-upon-Tyne under the superintendence of Arthur T Guttery.

Frederick served as District Committee Secretary and Missionary Secretary in the Bradford and Halifax District, each for a term of five years.

Frederick was Secretary of Conference at Southport in 1928. He also served as Treasurer of the Itinerant Ministers’ Friendly Society.

His obituary records that he was a good, kind, soul, who found his highest joy, not in attaining anything for himself, but in serving without stint in the Church he so much loved. He was a student but never a book-worm, nor did he spend time in his study that could be better spent in the common tasks that came his way day by day. Frederick was also a lover of poetry.

Frederick married Florence May Cooper in the spring of 1933 at Wakefield, Yorkshire.