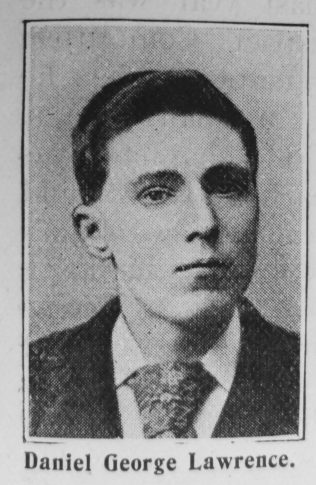 Transcription of Obituary In the Primitive Methodist Magazine by H. Owen

DANIEL GEORGE LAWRENCE was only 22 years of age when the Master called him to the higher service of heaven, so that the sun went down on our brother before it was well up. But he died with all the beauty and fervour of piety fresh upon him. The Lord plucked the flower before a leaf had faded, for the adornment of his everlasting garden.

The president of the Christian Endeavour, Mill Street, writes of him:— “I have known George Lawrence eight years, ever since he came to Crewe. He was deeply attached to the Mill Street Church and Sunday School, and was ever anxious for the success of the cause. A more willing worker there could not be, and when health permitted he was always at his post, and acted for some time as one of the secretaries and harmoniumists to the Young People’s Society of Christian Endeavour. He was a most liberal supporter of the various funds of the Church. Some two years ago he asked to be made an active member of the Y.P.S.C.E., and to have his name put on the Church Roll Book so that he might contribute regularly to the funds. As the quarter drew to a close, there was no necessity to remind him, for his contribution was always most readily and cheerfully forthcoming. His death means a vacancy in our Church School, and Endeavour.”

As a Christian he adorned the doctrine of Jesus Christ, and ever tried to emulate his Master. His piety was not of the sickly sentimental type, but robust and manly. He preferred to serve rather than stand and wait; he was far happier in ministering to others than in being ministered unto. As a Christian worker, he was indefatigable. Whittier’s prayer seems to me to have been his.
If there be some weaker one,
Give me strength to help him on;
If a blinder soul there be,
Let me guide him nearer Thee.
Make my mortal dreams come true
With the work I fain would do;
Let me find in Thy employ
Peace that dearer is than joy;
Out of self to love be led,
And to Heaven acclimated,
Until all things sweet and good
Seem my natural habitude.

The Christian life was a sphere for the best exercise of his best gifts of head and heart. He was eloquent in service for his Lord. If he could help a poor old woman to hear God speaking to her by spending an hour with her reading the Bible, he was there to help her to hear His voice.

Carlyle has said “The latest gospel in this world is, ‘Man know thy work, and do it’.” This is what our departed friend seemed ever to know and do. He thoroughly imbibed the sentiment expressed in the words—
We should count time by heart throbs.
He most lives who thinks most –
Feels the noblest –
Acts the best.

One friend has gone, his lips are sealed, his voice is hushed in death, but his example is before us, and his influence is with us. We shall remember him fondly by the sweetness of his temper, by the charity of his heart, by the saintliness of his life, for “he wore the white flower of a blameless life.” He has left a noble legacy behind him. Death has not captured his influence, that is left behind, and shall walk up and down the earth, moulding men after the similitude of Jesus our Lord. “Good-bye till we meet in the morning.” We will not look down into the grave, for thou art not there, but up to heaven, and hope to meet around the throne of God.

Daniel was born in 1878 at Long Ditton, Surrey, to parents William Lawrence and Rebecca Jane Watkins. William was a PM Minister.

Daniel died in the Newcastle under Lyme Registration District, Staffordshire.