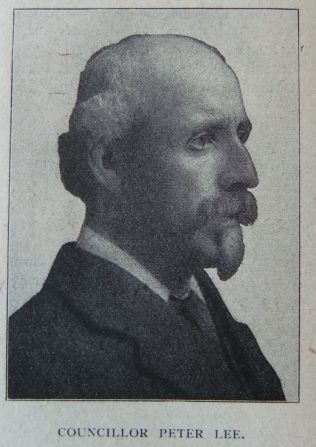 The following sketch in the Primitive Methodist Magazine reflects how Peter Lee was viewed in the Connexion. It illustrates the shift in political support to Labour from Liberal within the PM people in the years following WW1.

Although not mentioned in the ‘sketch’ Peter was best known as a trade union leader amongst the miners in Co. Durham.

Chairman of the Durham County Council

By the Rev. H Fletcher

There is a revolution in the personnel of Durham County Council. Mr. Peter Lee is the chosen chairman. We shall be surprised if the workers do not benefit under his presidency. He is a striking personality, and on seeing him there is the inclination to ask: “Who is that gentleman?” He is simple and dignified. There is a bigness and graciousness, strength and tenderness in his character. A princely man his is. His noble presence attracts everyone. He is a democrat to the finger-tips, and a loyal constitutionalist, a convinced and enlightened Free Churchman and Primitive Methodist; an enthusiastic Sunday school teacher, a most acceptable local preacher, and a wise and valued official of Wheatley Hill Society and Thornley Circuit. Firmly adhering to Labour’s national programme, he is anxious that the Spirit of Jesus may capture his Party.

Born in the mining village of Trimdon Grange, he started to work when a mere child of nine years, in a Lancashire cotton mill. His parents returning to Durham county, young Peter became a driver in the coal pit when only ten years of age. Physically robust, a powerful frame was developed, and at the usual age of sixteen and a half he was a coal hewer.

Romance and adventure are in his blood. The eager youth made of to the United States and saw life in Ohio, Pennsylvania and Kentucky. Later his love of adventure led him to South Africa, determined to seek his fortune in the Rand gold mines, and he arrived just after the Jamieson Raid. Terrible hardships and grave discomforts were experienced in these years – a floor of an engine-house as bed; subject to the gnawing pangs of hunger; reduced to penury. Yet these hard days widened experience, and gave the benefit of travel. Coming back to the old country and wending his way to Wheatley Hill, he was soon selected as check-weighman, and there for twenty years he has been a prominent figure, indelibly impressing his personality on the village and neighbourhood. Wheatley Hill Primitive Methodist Church holds a commanding position in the vicinity and Peter Lee is credited with enriching and broadening its influence and sway. The Church is central in his life. His wife and daughters love their father’s Church. His only son, Harold, was awarded the Distinguished Service Medal and the Medaille Militaire of France for gallantry at the Battle of Jutland. He was also mentioned by Rudyard Kipling as being “one of three wise men” who saved their ship.

Peter was born in 1864 at Trimdon Grange, County Durham to parents Thomas and Hannah. Thomas was a coal miner.