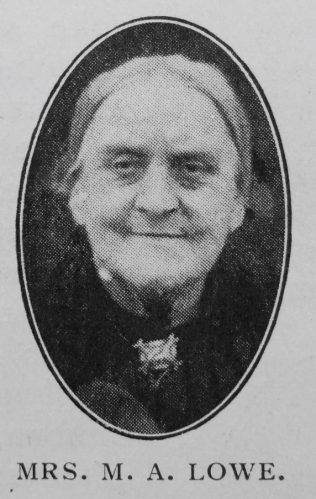 Almost the last link with the past history of our Northwood Society has been broken by the lamented death of Mrs. Mary A. Lowe. She was born at Tunstall August 20th, 1830, and died at Northwood. She was the grand-daughter of Mary Walsh, who was associated with William Clowes in the formation of the first Society Class. She had vivid recollections of H. Bourne. In 1842 she became a member of our Church and was an active worker for nearly seventy years. Her first Class Leader was James Nixon.

In December, 1851, she was married to the late Wm. Lowe. They removed to Washerwall, and were the means of introducing Primitive Methodism into that part of North Staffs. Early in 1865 they settled in Northwood and took deep interest in the erection of our Church. For forty-six years our Sister gave the best she had to the cause. Many pages might be written of her large-hearted generosity. For sixty years her home was always open to our preachers.

Rev. Wm. Mincher, writing to her son, says: “Your mother was one of God’s saints. Her simple faith in God and her deep spiritual experience have many times made me look into her face with thankful wonder.”

Rev. Geo. Jones writes: “She was a womanly soul whose goodness was known best by those who came nearest to her.”

Mrs. Lowe was a loyal member of our Church. For a long time she had been in failing health, and on May 1st quietly went home to God. The funeral was conducted by Revs. W. Lawrence, J.A. Taylor, and R.W. Russell. On the following Sunday evening Mr. Taylor preached a fitting memorial sermon to a large and appreciative congregation.

Before her marriage Mary worked as a printer transferrer in a pottery (1851).

Mary died on 1 May 1911 at Northwood, Hanley, Staffordshire.