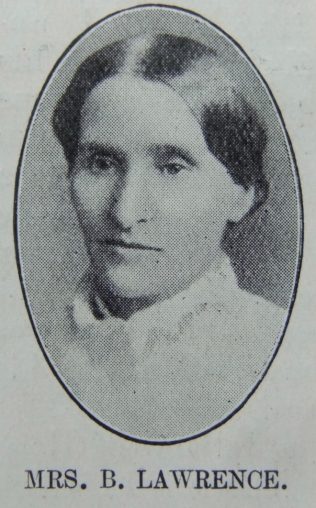 The passing away of Mrs. Lawrence brought sorrow to many, and especially to her husband. She was the living embodiment of the principles of Jesus. She went about doing good, and all who came in contact with her felt the influence of her beautiful spirit. When comparatively young she was left a widow with three little children to find for, and right bravely and successfully did she do it.

The Rev. W.R. Brotherton, a son by her first husband, says: “Among the earliest of my recollections is that of my mother closing her shop every day after dinner that she might seek Divine guidance and grace for herself and her little ones, and of my weeping in sympathy with her. The spiritual aroma of those days persists with me until now. In my years of infancy and youth she was my guiding star into Christian truth and life. It seems to me that but for her noble life under many difficulties I should have wandered far away from God.”

Her home was her kingdom, and in it how devoted, wise, patient, industrious, and hospitable she was. She was full of works of mercy. Her unselfishness and self-sacriness were — without limit, and she was equally conspicuous in the tenderness, sweetness, and peaceableness of her disposition.

The House of God was precious to her, and when she had a somewhat large family at home domestic duties were so arranged that every member of the family was regularly at the Sunday morning service. She was never absent from the means of grace if health permitted her to be present. She may truly be classed among the best we have ever known. Her work was of the quiet, unassuming order, but was always most effectively done.

She was born January 22nd, 1832, and passed to her rest July 1st, 1909, after a brief but painful illness, and was interred in Wood Green Cemetery, July 5th.

An impressive address was delivered by the circuit minister. For long years our departed sister will be remembered and held in honour for her generous, kindly deeds, and the beauty and charm of her saintly life.

Bathsheba was born on 22 January 1832 at Wednesbury, Staffordshire, to parents John Rigby, a coach smith (1851), and Mary.