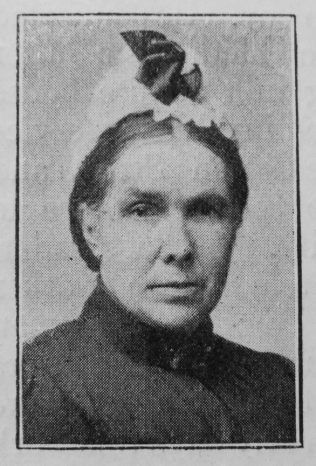 Ruth Lynam, of Marehay, Ripley, was born at Whitemoor, near Belper, on May 29th, 1844. She was converted whilst young, and for fifty years was a member of the Christian Church. Some thirty years ago she removed to Marehay and joined our little cause there – and proved herself to be a genuine supporter of Primitive Methodism. At different times she has held the office of class leader, assistant superintendent and treasurer of Sunday School, president, secretary and treasurer of Band of Hope, book steward, and for over twenty years seat rent collector.

Her love of temperance was specially strong, and she did noble service in this cause. She was interested in all departments of our work. A rare friend to the preachers, seldom absent from service, her presence was an inspiration. She was specially gifted in prayer like many of our early Methodists. She travelled hundreds of miles in begging for the church. In the home and in the church she sought to honour her Saviour and several of her children are amongst our best workers.

Early in the year she was stricken with a painful illness. She bore it with patience and resignation, manifesting a simple trust in Jesus, and on Tuesday, April 16th, passed peacefully to her home. The funeral service in the chapel was largely attended. It was conducted by the Circuit ministers. Her removal leaves a blank which it will be difficult to fill, but her memory will be cherished with gratitude and joy by many who hope to meet her when their work is done.

Ruth was born to parents Samuel, a coal miner, and Miriam.

She married Samuel Lynam (b1843), a colliery engineer, on 17 May 1863 at Duffield, Derbyshire. Census return identify seven children.