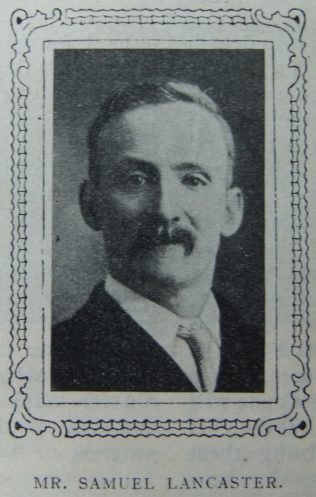 MR. SAMUEL LANCASTER was born at Wretton, in the Downham Market Circuit, 1864. The first Primitive Methodist services in his native village, were held in his grandfather’s house, which was always a home for the preachers. On his removal to Coxhoe, 24 years ago, he was converted under the ministry of Rev. E. Cairns. At once he joined he Church and became an active worker. His hands are always full of work. He is deeply interested in every department of Church life and work. For over 20 years he has been Society Steward at Coxhoe, Co. Durham. He has been for 21 years the Sunday school treasurer, and has been a Sunday school teacher for 22 years. At present he is the school superintendent. He is also a trustee for several Chapels in the Coxhoe Circuit. Mr. Lancaster is most loyal to his own church, and never runs away from his own place, which he attends three times every Sunday. He is a valuable Circuit official, and has been secretary to the Quarterly Meeting ever since the formation of the Circuit.

The prosperity of the Circuit is the joy of his life. Beside his religious duties, Mr. Lancaster is a member of the Sedgefield Board of Guardians, is a school manager, and is secretary of the miners’ lodge. In politics he is a Liberal. He is a man of moral worth and sound judgement, whose character may be summed up in the words of the apostle, “Diligent in business, fervent in spirit, serving the Lord.”

Mr. Lancaster has a splendid helpmate in his wife, who is a member of the choir, and a Sunday school teacher. She is in her place in the school every Sunday morning, and is a very active Christian Endeavourer. May they be long spared to the Church they love so well.

Samuel was born in 1864 to parents William and Susan. William worked the land.

On moving to Coxhoe, Samuel worked as a coal miner. The 1911 census records him as a checkweigher at the colliery.

Samuel married Esther Jane Bennett (1871-1944) in the summer of 1889 in the Stockton Registration District, Co. Durham.