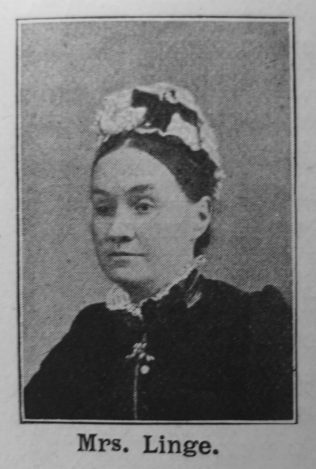 Transcription of Obituary In the Primitive Methodist Magazine by G.

The few facts of our sister’s life are soon told. Born in a country village, when quite young she removed with her parents to Newcastle-on-Tyne, where they attended Brunswick Place Wesleyan Chapel. She was blessed in having a mother of fine character and devoted piety. She shed a rich influence on her child’s life, and did not a little to mould her character. Under influence like that, it is not surprising that our sister sought the Lord while she was yet young, and feared God from her youth. When nineteen years of age she married Mr. S. Johnson, the son of a godly pair. After some years of married life he was taken from her, and then she married Mr. Linge, to whom her death is a great loss. Their home-life was one of perfect purity and peace. No one could cross the threshold of their home without feeling that it was a Christian home, and that a Divine Presence lingered there. From the time of her conversion Mrs. Linge had a noble ambition to make her life tell for God, and to fill a place in His Church. For years she was a great sufferer, but it did not make her peevish and fretful, a burden to herself and those about her. So far from souring her soul, it seemed, like the mellowing touch on autumnal fruit, to give added beauty and sweetness to her spirit. She was not able to get out to public worship very often, but she had a kindly thought for those that could, and was wishful to make the House of God as comfortable as possible. It was that thought that prompted her to put a hot water heating apparatus into our Chapel at Southwick at a cost of fully £80. When stricken with the illness that terminated in her death she seems to have known it was the call home, and it found her quite ready. She not only expressed her confidence that all was well, but in a prayer, beautiful in its simplicity, submission, and assurance, she commended herself to God. Almost the last thing she said was to repeat Wesley’s immortal hymn:—
Jesus, lover of my soul,
Let me to thy bosom fly;
While the nearer waters roll,
While the tempest still is high.

In this spirit she crossed the bar and met her Pilot face to face, the last storm subsiding into the eternal calm and peace of heaven. She died July 26th, and was interred in Southwick Cemetery on July 29th, 1900. She rests from her labours and her works do follow her.

I have not been able to identify Isabella in census returns before 1886, so have been unable to identify her first husband, or maiden name. Can anyone point me in the right direction.