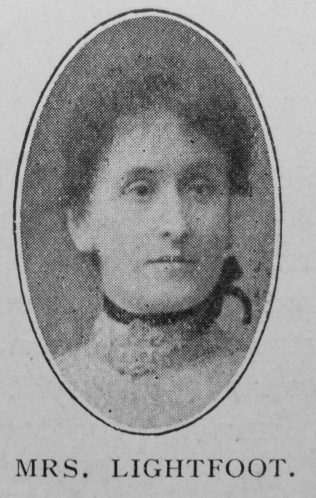 Transcription of obituary published in the Primitive Methodist Magazine by C.F. Gill

The beloved wife of the Rev. C.H. Lightfoot (Derby IV. Circuit) was born in London November 15th, 1862. Her parents were useful members of our Church, and in childhood claimed her for the Lord Jesus Christ. On June 4th, 1883, she became the wife of the Rev. C.H. Lightfoot and for nearly thirty years proved to be a true comrade and wise counsellor.

She gave herself without reserve and often with great self-sacrifice to God’s service, taking part in efforts to raise money for Church funds, and by her business ability securing great success. She found her chief glory in Sunday School work, rendering considerable service as a teacher, and in scholars’ preparatory classes for the scripture examinations.

She was greatly interested in the cause of temperance, and associated herself with the work of the B.W.T.A., serving as president of ward committees. As a minister’s wife she was in her right place, the afflicted always claimed her attention and sympathy, and the poor knew and loved her as a friend. Her anxiety for her children was always manifest, and they rise up to call her blessed.

Her long illness was borne with exemplary patience and submission. She entered into the joy of the Lord Wednesday, July 31st, 1912. The funeral service was conducted by the Revs. C.F. Gill, R. Smith and J.C. Wenn, many friends assembling to pay a last tribute of respect. A memorial service was held Sunday evening, August 11th, in the Dale Road Chapel, Derby, conducted by the writer of this memoir. We bespeak for our brother and his children the comfort of the Holy Spirit, and the inspiration of that sure and certain hope of reunion in the land of cloudless day.

Mary was born on 15 November 1862 at Stepney, London, to parents William and Maria. She was baptised on 11 January 1863 at St Dunstan, Stepney.

Before her marriage, Mary was apprenticed to a draper (1881).