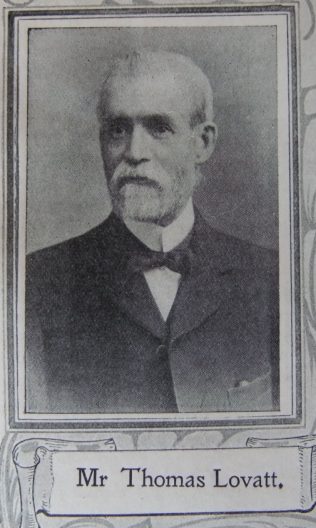 Primitive Methodism has reason to be proud of such men as Mr. Thomas Lovatt, the Circuit Steward of the Newcastle-under-Lyme Station. For forty-six years he has been a consistent member of the “Higherland” Church, in the town of his birth. As well as being Circuit Chancellor, he has held with credit the office of Society Steward for twenty-nine years, besides working in the Sunday School. He is an enthusiastic missionary supporter.

As a lad he collected diligently. As a man he occupies annually the chair at the missionary meeting. In 1905 he gave 100 guineas to stimulate generosity in the District to the missionary work, and he promised the same sum to the Centenary fund. If his pocket were as big as his heart there would be no more generous donor in the Connexion. Loyally in all his good deeds he has been upheld by his family. At seventy he is still young, and we pray for him years of service.

Thomas was born in 1838 at Newcastle-under-Lyme, Staffordshire, to parents James and Margaret. James was a grocer. (Note: See correction below)

Thomas was a potters ornamentor and dealer in glass and china.