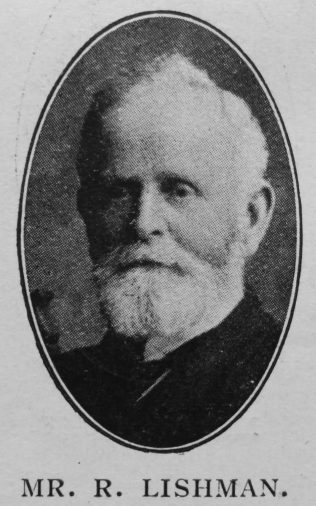 Transcription of obituary published in the Primitive Methodist Magazine by M.T.P.

In the passing of Robert Lishman our church is impoverished. He died August 3rd, 1910, aged 71 years. He came to know Christ as his Saviour in his 17th year, so that for 54 years he was a member of the Primitive Methodist Church.

He was first with the Chester-le-Street Station, but the greater part of his life-work was done at Marsden Colliery in South Shields Station. He filled many offices in the Church, being for-long years Society Steward, and loyally upholding the cause in its days of feebleness and struggle. He was a Sunday School teacher, influencing especially the young men, and for 36 years a local preacher. He was also an officer of the Local Preachers’ Mutual Aid Association.

Not confined to the Church, he served on the Burial Board for several years; was a member of the Parish Council, and Chairman of the Co-operative Society. In politics he took a deep interest in all that was Progressive.

He was, however, first and foremost devoted to his church. He was one of our first donors to the

Centenary Fund. The larger claims of Primitive Methodism always appealed most powerfully to him. As a Local Preacher he rendered loyal, devoted service. He had a high and worthy conception of the privilege and responsibility of a Local Preacher, and strenuously strove to realise it throughout his life.

He was cheery and kindly, lifting the burdens of others, and ever careful not to impose fresh ones. He lived for the highest things in life. Deeply spiritual, with a strong clear faith in God, until illness overtook him he was a regular attendant at week-night worship and class meeting. It was meet that honours should be his, and as a delegate to District Meeting and Conference his brethren showed their esteem and recognition of him.