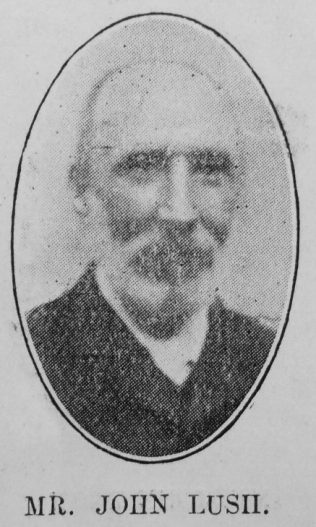 Mr. John Lush was born in the year 1827. At the age of twenty-four years he was converted at Bramshaw in cottage meeting. When Cadnam (in the New Forest) was missioned, his father opened his house for preaching services, resulting in the building of a wooden chapel, and later a more substantial place of worship. The church was not slow in recognising that Mr. Lush had “gifts and graces” of no mean order. He was soon in great demand as a local preacher, and the “fruits” of his long and faithful service are remarkable and widespread.

Some years ago an accident led to his being taken to the South Hants Infirmary, and he was placed in a bed next to where a noted infidel lay, but such was the influence of the former upon the latter that both were soon praying, singing and rejoicing together. It was a marvellous scene.

Mr. Lush was a favourite at camp meetings. It is almost impossible to imagine what Primitive Methodism would have been in these parts but for the personality and consecrated services of our dear brother beloved: a man mighty in prayer, acquainted with his Bible and full of a holy passion for souls.

After five months’ serious illness during which he suffered greatly, but always patiently, and with complete resignation, he peacefully entered into rest on July 17th, singing just before, “I long to be there.” As in life so in death, he had strong faith, a bright hope, abounding joy and full assurance.

A widow aged eighty, (a true mother in Israel), two devoted daughters, and a son are left and will ever think of the departed one with fondest love. The large number attending the funeral and the crowded service on the following Sunday, conducted by the writer, evidenced the sincere appreciation of one who had been fifty-seven years a member, who for fifty-five years had been an honoured local preacher and for many years a class leader. He filled an honourable place and will be much missed. “He was a good man and full of the Holy Ghost and of faith.”