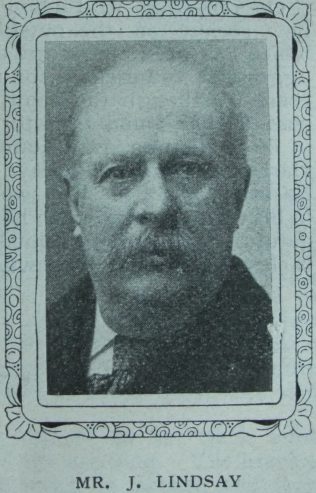 Mr. James Lindsay is a local preacher in the Caledonian Road Circuit, London I. He like most of our worthy workers, hails from a village. He was born May 21st, 1843, at Aldworth, in Newbury Circuit. His parents early took him to the house of God. At the age of sixteen he left home for Reading, where he attended the services in Minster Street Chapel. Here he was converted, and with the society he removed into the large New Hall in London Street, Reading. He was placed on the preachers’ plan in 1864. He removed to London in 1868, and joined the church in Great James Street, Marylebone. Here he took charge of a Sunday school class and a society class. In 1871 he removed to Peterborough, and joined the New Road society. In March, 1879, he returned to London, and joined the Caledonian Road society, where for the last twenty-eight years he has unstintingly devoted his talents to the work of the Church both as a local preacher and class leader. As an official he is a worthy brother, a lover of peace, and a promoter of prosperity. As a local preacher he is welcomed in the pulpit by the congregation. He is acceptable, edifying, unpretentious, painstaking, practical and above everything humble; willing ever to go to the smallest place if required, and does not clamour for the principal pulpits. It matters not who comes or goes, Brother Lindsay is at his post; he is steady-going, sincere and consistent. He has a commanding voice and appearance, and his brethren often designate him the Bishop of Caledonian Road.

James worked as a shepherd and later joined the Midland Railway, whose records place him at Peterborough from 1871 to 1879 and then based at St Pancras from 1879-1908. He worked as a Goods Guard. On retirement, James moved to Dunstable, Bedfordshire, where the 1911 census records him as a chapel keeper.

Note: Many of the records are in the surname Lindsey, not Lindsay.