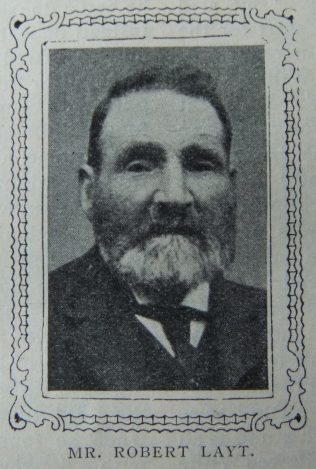 ROBERT LAYT is a native of Stow Bedon, in the Rockland Circuit. For a few years, early in life, his parents moved into a village nearby – but returned again to Stow Bedon, where the remainder of his life has been spent. He was born March 11, 1839. At the age of about twenty years he became a teacher in the Sunday school. During the ministry of the late Rev. R. Key on the Circuit in 1858, a mighty revival broke out, and amongst the converts was Robert Layt. This took place on February 16, 1858, an event often referred to when giving his religious experience.

He, at once, began in earnest to seek the spiritual well-being of his neighbours, and he has been a teacher for fifty-one years, local preacher forty-five years, and has held the office of assistant and is now superintendent of the Sunday school.

In 1869 he was made assistant Society steward and held that position for twenty years. But for the last twenty years he has been sole steward. From the first he has entered most heartily into the life of the church, and his one object has always been its prosperity. He is very highly respected through the Circuit.

He takes a good share of work on the plan, but he never leaves home for his appointments without making every arrangement for the work of the Society; he is, in fact, looked up to as the father of the Society.

His house is the home of preachers, who always receive a hearty welcome. The preachers all count it a real joy to visit the home.

Our friend is still active, and feels the work of the church a great delight; and we hope and pray he may yet have many years in the work he loves so well.

Robert was born in 1839 to parents Isaac and Charlotte. Isaac was a farmer.

Robert worked on the family farm until he married. He then became a butcher.

Robert died in the summer of 1922 at Stow Bedon, Norfolk.