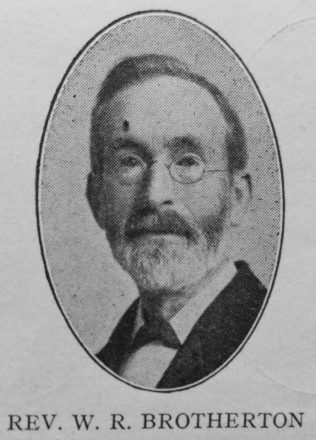 Transcription of obituary published in the Primitive Methodist Magazine by M.F.

Rev. William Rigby Brotherton, a faithful and beloved minister of our Church, was born in Sheffield, Yorkshire, in 1856, and died on Easter Sunday, 27th April, 1932, at the age of 76 years, in his home, “Daverton,” Broadstone Avenue, Leamore, Walsall, and was buried in Wood Green Cemetery, Wednesbury, Staffordshire.

Soon after he was born, his parents removed to Wolverhampton and from there to Wood Green, Wednesbury, where the days of his early youth and manhood were spent. He was, to a large degree, the product of a Christian home. His Christian character took shape in an atmosphere of true spiritual piety and thorough evangelical religion. Therefore it is not surprising to find that in his early teens he accepted Christ as his Saviour and Lord. His first sphere of Christian service was in our Pleek Church, Sunday School, where he was enrolled as a teacher. Subsequently he was asked to prepare himself for the Local Preachers’ Plan; in due course he became an accredited local preacher on the Darlaston Plan. In that sphere he soon revealed still greater promise of usefulness and was heartily recommended by the Pleek Society for the ministry. The recommendation was duly confirmed by the Darlaston Quarterly Meeting. After successfully passing the preliminary examinations, he entered Sunderland College in the year 1880. Dr. William Antliff was then Principal and Rev. Thomas Greenfield, Tutor. Five of the men of his year volunteered for Foreign Service, whilst four others have been President of Conference.

His active ministry began in the year 1881, his first circuit being in the Isle of Wight. Subsequent spheres were in Lancashire, Yorkshire and the West of England. In all his circuits his ministry was characterized by consecrated devotion. He lived for the Church. Her success was his chiefest joy. Duty was constrained by love. It was done with a pure heart fervently. He exercised a ministry of abiding fruitfulness. As a circuit administrator he was thorough, efficient and painstaking. The harmony of the circuits was preserved by his diligence to details. During his term at Ripon, Yorkshire, a fine organ was installed. His administrative gifts were recognised in the different districts in which he travelled. In carrying out the duties of General Committee Delegate, District Secretary and other important offices, he fully justified the confidence of the brethren.

As a pastor he excelled. He was a diligent student of the Scriptures and had a well-stored mind. He was progressive in his thinking and a lover of the great works of literature. As a preacher he was earnest and true to the evangelical teaching of the Methodist Church. His sermons were carefully prepared, marked with clearness of aim, sound in their doctrinal and ethical teaching. Moreover he possessed good social qualities. His sympathies were large and genuine. Through his sheer kindness of heart many burdens were lightened and downcast souls were greatly helped and cheered. Though of a quiet and unobtrusive nature, he had a real passion for souls and a heart of flame. He rejoiced in a rich experience of the “Grace of God” and sought to share it with others.

Just shortly before his death he wrote to a friend saying, “There is One who knows the best and worst of our life’s history. We thank Him for all His goodness and mercy which we have experienced.”

Rev. William Bennion who shared his friendship all through his ministry, says, “He was a gracious personality. A true friend. The fragrance of his memory will abide.”

He has been aptly described by Rev. Joseph Pearce: “As one who kept to the simple life of loving his Lord and so loving all that belonged to Him.”

Rev. W.J. Cripps who was superintendent minister at Presteigne, where Mr. Brotherton retired from the active ministry, says, “He was a good man and will be remembered for his trustfulness of soul, the embodiment of kindness and thoughtful consideration.”

The members and friends of Walsall Circuit will cherish the memory of his cheerful disposition and unswerving loyalty to the Church. We shall miss his presence at the Sunday Services and the glow of his fellowship in his home. He adorned the ministry with a pure life and served the interests of the Church with true devotion and Christian courage.

After forty years of happy and fruitful service he retired from the active ministry in Presteigne in 1921. In 1929 he removed to Walsall, where he regularly attended the Sunday Services at Stafford Street Church. On occasion he preached in the pulpits of the Circuit. During the winter months his health had not been good and he was released from all preaching appointments, much to his sorrow. Still he was to able get about and was most regular in his attendance at the Sunday services. It was only during the last week or two of his life that his health seemed to grow worse. Yet it was confidently hoped that he would again pull through, but it was not to be.

Easter Morning had come with all its sacred memories, but before its close God’s faithful servant had been called to share in the risen glory of Christ in the Homeland. His passing was a true reflex of his life, quiet, trustful and triumphant. The funeral service was held in Stafford Street Church, conducted by Rev. M. Featherstone, assisted by Rev. F.H. Randell and Rev. F. Henderson Brown, General Committee representative. The committal was taken by the minister and Rev. G.H. Brown closed in Prayer. The words of Pope to his friend Addison fittingly express our appreciation of the life and character of Rev. Wiillam Brotherton :

“A friend to truth, of soul sincere,
In action faithful, in honour clear.
Who broke no promise, served no private end,
Who gained no title, and lost no friend.’’

We tender to Mrs. Brotherton and her two daughters our sincere sympathy in their great loss. Also, we pray that the fulness of Divine Grace may succour and sustain them in their loneliness and sorrow.

William was born in late 1855 at Sheffield, Yorkshire, to parents William, an engineering tool fitter, and Bathsheba. He was baptised on 7 October 1855 at St Mary, Sheffield.

He married Kate Hannah Green (abt1855-1914) in the summer of 1885 in the Petersfield Registration District, Hampshire. Census returns identify one daughter.

He married Emma Goodwin in the summer of 1916 in the Atchem Registration District, Shropshire.