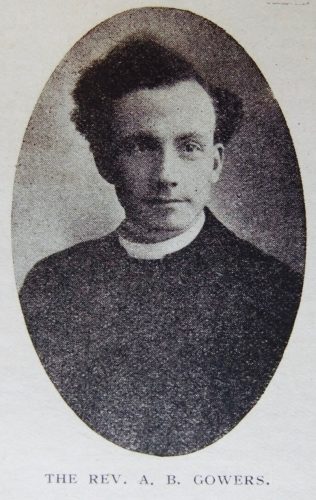 ALFRED BARRETT GOWERS: born in Poplar, London, on 20th May, 1886. He came from a Primitive Methodist background and entered Hartley College, where he was college secretary, in 1906. After leaving Hartley he gave faithful service in the following circuits: Lowestoft, Sheringham, Kingston-on-Thames, Newbury, Fakenham, Ryde and Ventnor (there followed two years’ service in Australia), Ashby-de-la-Zouch, Oldham (Lees Road), Martham, Hunstanton, Grantham and East Dereham. After superannuation in 1952 he went back to the Isle of Wight where he had the care of the small church at Seaview and where, for three years, he found great delight in organising the Isle of Wight Musical Festival. He was the most modest and unassuming of men and this trait tended to conceal his greatness. Throughout his ministry he was a diligent pastor, a most able administrator, and a very thoughtful preacher. He was a deep and wide reader and loved his Greek Testament. He had the rare gift of translating his learning so that a child could understand. This is best illustrated by his book, “Examining Dad on the Bible”, which ran into four editions. Former colleagues testify to his friendship, his great wisdom and foresight, his seemingly limitless patience, his quiet, pawky sense of humour and his loyalty under all circumstances. His deep devotion to his Lord was the basis of all his work and in him, the words of Paul were fulfilled, “Love is patient; love is kind and envies no one”. He died on 28th July, 1973 in the eighty-eighth year of his age and the sixty-first year of his ministry.

Alfred was born on 20 May 1886 at Poplar, London, to parents Thomas, an oil colour man, and Frances.

Alfred died on 28 July 1973 in the Holderness Registration District, Yorkshire.

Note: A record of a return passage from Australia to Hull, arriving 3 May 1930, includes an additional child, Michael, aged one. I have not been able to identify a birth record for this child.