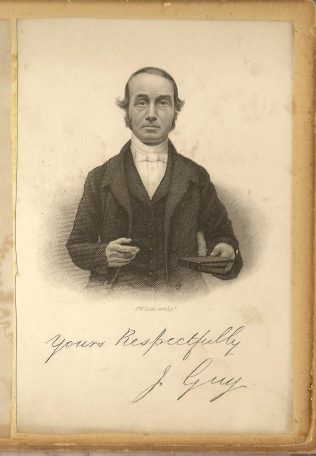 John was born on 28 October 1811 at Freshford, Somerset to parents Thomas and Mary. he was baptised on 17 November 1811.

Petty records the progress made in Hertfordshire by John Guy and his colleagues in 1845. In particular, he records that they were able to open Hitchin. This success enabled the Hertford station to be divided into two stations from 1847 with John Guy being appointed to Baldock.

In reference to Baldock, John writes, ‘When our people first missioned this neat little town, containing about 2,000 inhabitants, Norton End, commonly called Hell End, on account of the general immorality of its residents, became the scene of their labours. In the autumn of 1844 the word began to take effect, and in a few weeks about sixty persons were converted to God.’ A chapel, converted from two cottages was opened for worship in April 1847.

John married Catherine Mary Sargeant on 7 July 1840 in Reading. Catherine was born in 1819 in Binfield, Berkshire, daughter of Richard and Mary. She died on 15 July 1849. They had three children.

John married Elizabeth (b1826) . They had a further four children.