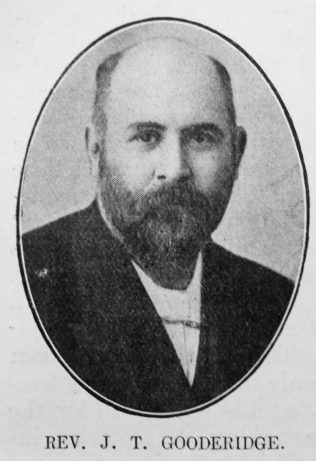 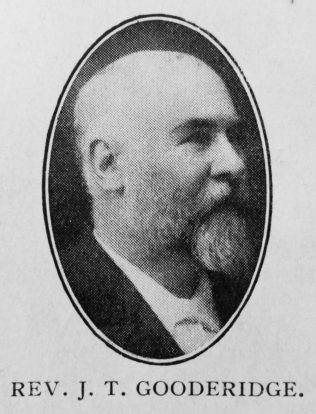 Transcription of Obituary published in the Primitive Methodist Magazine by R.W.R.

As a great surprise the death of the Rev. John T. Gooderidge came to a great circle of friends. Born at Wath-on-Dearne, near Mexborough, December 17th, 1863, he was initiated from his earliest days into the fellowships of our Church. The business to which he was devoted did not offer sufficient scope for his gifts, and soon he gave evidence of ability which secured for him a call into our ministry, which subsequent years has justified. Mr. Huntbach, of Hanley, the chief of a firm of drapers, unhesitatingly freed Mr. Gooderidge from business that he might devote himself to the work of the ministry. Duly trained in Hartley College, he was stationed at Cowes. Strong in body and enterprising in mind, he soon established himself on his probationary circuit as a man who meant business and to whom progress was a condition of happiness. Leaving Cowes, he was stationed at Bromley, in which place he spent three happy years. Moving to Leicester Second Circuit, he made friends who have never forgotten him. Leaving Leicester at the end of three years’ ministry, he was stationed at Derby I. Circuit, in which he did invaluable work for six years, building chapels, attending to schemes of renovation, and doing much for the social life of the town. Accepting a call to Nottingham I. Circuit, he found ample scope for his gifts of mind and heart. At Canaan Church he will long be remembered for his monumental work. Cottages, which hid in their wretched shadows the stately church, were removed, and the bold front of the building was brought into prominence. A costly organ was installed and opened free of debt, and at Forest Road a similar work was done.

The gifts of Mr. Gooderidge may be described as versatile. He could hammer on one anvil till the task was accomplished, and then turn to something widely different with tremendous zest. His genius sometimes found expression in things material: money raising for acute cases of distress, church improvements and bazaar arrangements. He could do well as secretary of a committee or a G.C.D. of a Synod, and then turn the whole force of his soul into a revival mission and lead sinners to Jesus.

He possessed, too, the instinct of travel, and a genius for geography. Several times he saw beyond the narrow limits of our island home. Through Palestine and Egypt he travelled. Periodically he arranged tours for his friend, Mr. James MacLean. Geography had a fascination for him, and he was familiar with the names and excellences of all the cities in Europe. His last trip, accompanied by his friend, was through Italy and a part of Austria, including the Tyrol. Unfortunately the War was declared while he was en route; but a safe halting-place was found at Genoa, where travellers awaited the arrival of a steamer from Liverpool.

The optimism of our friend permeated all his work. Upon his face there was always a genial smile, and hope was the mistress of his soul. Tasks, which to an ordinary man would have been impossible, he took up courageously with a song upon his lips. In the pulpit his message was assuring and inspiring; the poor heard him gladly, and the rich received comfort. In pastoral work he was ideal, carrying sunshine wherever he went, and in homes of sickness and sorrow he soothed and healed.

In his work he was greatly aided by his devoted wife. His relationships were ideal, and his home was a castle. In all his trials and difficulties Mrs. Gooderidge shared. His home was his rallying centre. Illumined by the beaming faces of three sons and one daughter, it became to him a sanctuary – the replica of heaven. Of musical gifts himself, music became the tonic atmosphere of the household in which dull care was driven away. No one can ever forget the devotion of Mrs. Gooderidge during the long months of suffering – her kindly smile, her sane advice, her tender love, her subdued emotion, her wonderful control. The end came peacefully. On the evening of April 21st, just as the shadows were gleaned by the night, he passed into the unfading sunshine at the early age of fifty-two. The news of his departure was quickly communicated to his friends. It came as a shock, for his physical strength had been great. From distant places friends came to his burial, and ministers from many circuits were present. In the Forest Road Church the organ erected during his ministry played in deep pianissimo strains. The writer (Rev. R. W. Russell) conducted the service. From the Book of Life Revs. C.F. Gill and C.T. Fawcett read the famous passages. Rev. John. H. Hemshall spoke in highest terms of his life-long friend, and Rev. E. McLellan led us from scenes of death to the throne of the deathless God. The church was full and eyes were filled with tears. In the general cemetery Rev. James Flanagan committed the remains to the silent keeping of the earth, and in the hush of the moment the members of the Masonic Lodge filed past the open grave and dropped their emblems of sorrow upon the sleeping form. We pray for the lonely widow and stricken family, and commend them to the tender keeping of Infinite Love.

John was born on 17 December 1863 at Wath on Dearne, Yorkshire, to parents Thomas, an engine driver, and Emma.

Before entering the ministry Thomas worked as a draper’s assistant.