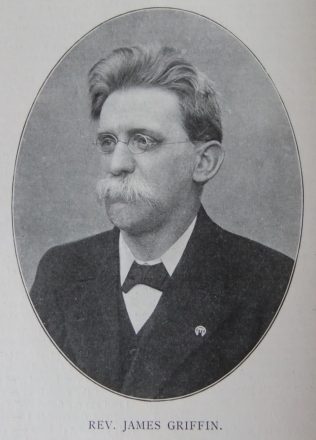 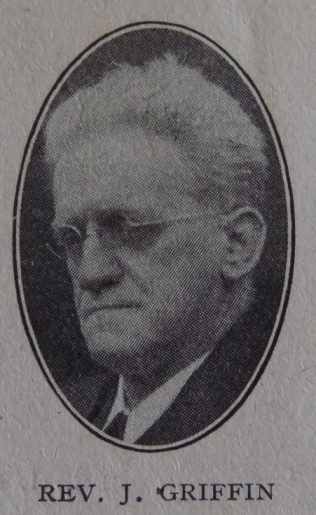 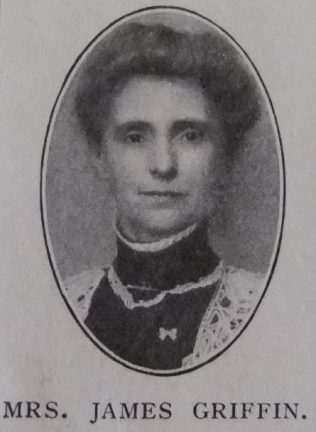 James was born on 29 December 1853 at Cradley Heath, Staffordshire, to parents William Griffin and Phoebe Price. William was a blacksmith who moved into manufacturing anchors and chain.

His parents were able to give James a good education, including a term at a Malvern Boarding School.

James was converted when eleven under the ministry of Rev James Baines. He made his first attempt at preaching when aged fourteen. James was placed on the Brierley Hill circuit plan. His early development was also made under the wing of Rev Joseph Ferguson.

Although denied the advantages of a theological college training, James set himself the task of making up for that omission and soon became one of the best equipped men of his day theologically, philosophically and in many other respects. His self-acquired mastery of New Testament Greek was a revelation; his knowledge of philosophy, with a strong preference for the idealistic, was extensive and profound.

His obituary records that great days were witnessed in Hull and the Potteries. Souls were saved; believers were stimulated and edified; local preachers were made. Increasing blindness imposed certain limitations, and brought him to his Gethsemane, but faith triumphed, and indomitable courage and rare persistence enabled him to overcome his affliction. He built up a large Braille library.

James was president of the 1910 Conference Arrangements Committee.

James superannuated in 1918, but remained active as ever. Laughingly he would say, ‘I am nor superannuated, but superanimated.’