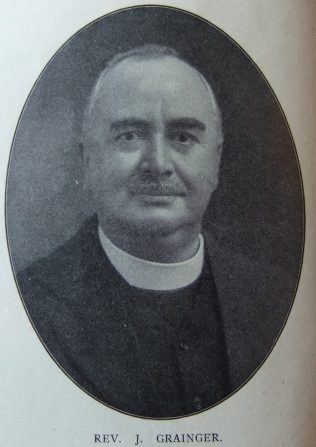 Joseph was born on 2 March 1874 at Bellshill, nr Motherwell, Scotland, to parents John Grainger and Ann (Nancy) Smith. John was an iron shearer (1881).

His early education was received at the Milton Street Day School and the PM Sunday School in Motherwell. At fourteen years of age, Joseph went to work in the iron works. In winter evenings he was to be found at the Secondary School pursuing his studies.

After joining the church, Joseph taught in Sunday School and was soon exhorting in the open-air and from the pulpits of his native circuit. Preaching at Blantyre one Sunday night a revival broke out and this determined his career.

Joseph spent fifteen years at Wrexham effecting its complete transformation. Sites were purchased, three churches and one Sunday school were erected. When he left most of the debt had been cleared, the number of scholars had trebled and the Church membership doubled.

When the evacuation of Dunkirk took place, the Dover press said, “he was there to meet the men from the little ships, to succour the wounded, write their letters and help men unable to feed themselves, to watch over men sprawled on station platforms too exhausted to move.”

When Joseph retired to Formby he served for six years as an active supernumerary, eventually returning to Southport.

Joseph had a flair for organisation. Joseph served the Liverpool District as Sunday School Secretary.

In 1928 he served as Secretary of the Tunstall Conference. For five years Joseph was secretary of the PM Ministers Friendly Society and for twenty-two years registrar for the Methodist Ministers’ Annuitant Society.

His obituary records that Joseph had a charm of manner, an optimism of spirit and a width of sympathy which won the young and inspired the old. In practically every circuit he served, he sent men into the ministry, whom he had first won by his friendship and then enlisted for the Church and his Master.